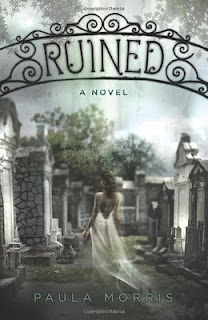 BOOK DESCRIPTION:  Rebecca couldn't feel more out of place in New Orleans. She's staying in a creepy house with her aunt, who reads tarot cards. And at the snooty prep school, a pack of filthy-rich girls treat Rebecca like she's invisible. Only gorgeous, unavailable Anton Grey gives Rebecca the time of day, but she wonders if he's got a hidden agenda.

Then one night, among the oak trees in Lafayette Cemetery, Rebecca makes a friend. Sweet, mysterious Lisette is eager to show Rebecca the nooks and crannies of New Orleans. There's just one catch.


Lisette is a ghost.


A ghost with a deep, dark secret, and a serious score to settle.


If you're a reader that's looking for a teeth grinding, heart pounding, sleep with the lights on ghost story, read no further.  You will likely be disappointed by Paula Morris' freshman effort, Ruined.  Not that Ruined is a poor book - - far from it.  But it's more like a ghost story with less calories and a lighter taste.


Ruined is aimed for the Young Adult audience but it's perfectly acceptable as an adult read as well.  This adult enjoyed it thoroughly from page one.  And while it's marketed as a ghost story, and there is indeed a central character that is a ghost, there is far more to it than that.  It's also the story of a displaced girl, a high school hierarchy and New Orleans history.

The New Orleans history was one of my favorite parts of the book.  I could easily see the grand old plantation homes with their stately pillars and expansive grounds, as well as the bustling and colorful streets of the Quarter.  The very best scene in the book, in my opinion, involved the ghostly Lisette walking Rebecca through New Orleans and the many ghosts wandering around the city, elbow to elbow with the living.  It was a colorfully well written passage, alternating between those lost souls who either didn't realize they were no longer living or were waiting to avenge their deaths and the living who inexplicably bumped into something that wasn't there or got a cold chill.  It definitely makes you wonder about that other realm, particularly in old cities like New Orleans with so much history.   And voodoo.

Voodoo plays a part in Ruined but not a huge one and readers who object to the magical or dark arts shouldn't take serious issue with Ruined.  By the same token, there is no objectionable language and no sexual scenes.  The violence is kept to a minimum with descriptions of the appearances of ghosts as Rebecca sees them - - they appear as they did at the time of their deaths, with the cause of their deaths at times very apparent.

I wouldn't say that Ruined is a dark book, maybe a little bit shaded and young readers could find certain sections to be a little much for them.

Rebecca is a good heroine; despite being new to the area she seems fairly secure in herself and doesn't seem to be looking for acceptance by the "cool crowd" at school.  While she doesn't have a somewhat typical teen attitude, she does sneak out of the house at night which is probably her most serious fault.

I found Ruined to be a read that I lost myself in for a couple of days and was happy to do so.  I look forward to author Paula Morris' future efforts.

On a shallow note, the cover is absolutely gorgeous.

Ruined is an entertaining story that will make you think, at least a little, and will certainly make you appreciate the glorious history of New Orleans.

Ruined is available for purchase at major booksellers now, including Amazon.   I am an Amazon affiliate.  If you make a purchase through my link, I will receive a small commission. This one sounds good! Thanks for the review!
Mary, A Book A Day

Hi Mary, thank you for stopping by!
I did enjoy "Ruined" - - a very non-scary but interesting ghost story.

Hope you'll be back by with your spooky reads!