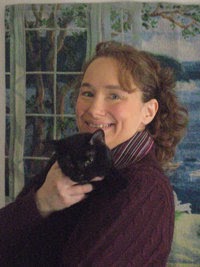 From Fanfiction to a Published Series
by Abigail Reynolds

I’m celebrating a big anniversary. It was ten years ago, in October 2001, that I first started posting Austen-related fiction. It wasn’t something I was planning to do. Several months before that, I’d discovered the Austen fanfiction available on The Republic of Pemberley. I read it voraciously. Some was good, some was bad, but it was fun to see what other people did with the Austen characters I loved. Back in those days there was very little Austen fanfiction available, so I exhausted the supply pretty quickly. That by itself probably wouldn’t have driven me to writing my own, but I was also in pretty desperate need of a distraction after the events of 9/11. Austen fanfiction was a perfect refuge, and since I was out of stories to read, I decided to write my own.

At the time, I planned to write one story as a diversion and then stop. I didn’t see it as an ongoing hobby, and I certainly had no idea it would become a career. I posted that first story online chapter by chapter, and to my astonishment, people actually liked it. It wasn’t until I finished that story in December that I discovered a nasty secret: writing is addictive. I tried going cold turkey, and that lasted about a week. But even as I went on to write and post several more novel-length stories, it was just for fun, because everybody knew that there was no market for published Jane Austen variations of the sort I wrote.

Eventually, as self-publishing became simpler, I put those stories into book form on Lulu.com, a self-publishing site. Several online readers had said they’d like to have them as books, and I thought it would be pretty cool myself. I set a goal of selling 100 copies and I was pretty darned excited by that idea. I ended up doing rather better than that, and one day I got a call from a publisher who wanted to publish them. I immediately decided this had to be a scam (see above about no market for Austen variations), but that’s a different story. Once the editor finally convinced me she was serious, some decisions had to be made.

I had five Austen variations ready to go, but they could only be published one at a time, so the first question I was asked was which one came first in the series. This was pretty confusing, since I hadn’t actually realized they were a series. Each Pride & Prejudice variation stood alone by its very nature, since each one retold the story of Elizabeth and Darcy as it might have happened if one event had happened differently. This meant that they could be read in any order, more like Nancy Drew mysteries than Harry Potter, but something had to come first. It ended up being completely out of the order I wrote them, with To Conquer Mr. Darcy/Impulse & Initiative, my second story, published first. My new release, Mr. Darcy’s Undoing, is actually the fourth novel-length story I wrote.

There were other issues at first, not least of which was introducing the reading public to the concept of a what-if story, as they were known on line. I coined the term Pemberley Variations for my set of books, and as more what-ifs were published by other authors, our tiny sub-sub-genre became known as Austen variations. Readers didn’t know what to make of them. Some were outraged, thinking I must be trying to improve on Jane Austen (as if that were possible!). Some expected them to be Pride & Prejudice sequels and were confused to discover they were something else entirely. It’s amazing to me to see readers today – four years after my first book came out – taking variations completely in stride as if they’d always been on the bookshelves.

It’s been an amazing journey. I celebrated my tenth anniversary of writing Austen variations by deciding to quit my day job so that I could devote more time to writing. I’m still astonished by it all.

Thanks for inviting me! 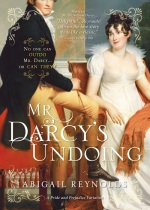 Thank you, Abigail, for stopping by and sharing your amazing ten year journey with us.  Best of luck with Mr. Darcy's Undoing!

So, readers, my question for you . . . if you could write fan fiction on any character or characters out there, who would it be?  You can choose characters from a book, tv series, film series, whatever characters speak to you.

I would say for me personally it would be characters from Pride & Prejudice because it's my absolute favorite book and Jane Austen gave us such a wonderfully witty and complex group of people to work from.  I'd love to know what you think!

Congratulations on your decision to quit your day job! YAY! That is so exciting. I cannot wait to see what you write next!

Hi Abigail. I wish you every success with your latest edition to the world of Austen re-imaginings. May you sell tons of books.

Hi Abigail. I wish you every success with your latest edition to the world of Austen re-imaginings. May you sell tons of books. You paved the way for so many of us, and for myself, I'm grateful.

Thanks for stopping by, Jennifer. And I agree - - yay to Abigail for quitting her day job. And yes, I'm a bit jealous! :)

Hi Mary! Happy to see you. Will see you here in a few days!

What fabulous news! Congratulations! See you in Ft. Worth!