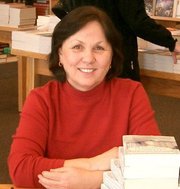 
Hi Lori. It’s good to be back at Psychotic State. You asked that I write about bringing the supernatural to Regency England.

First, let me tell you how I ended up writing a werewolf story. I had actually published my first novel with Sourcebooks, Searching for Pemberley, before I learned that there is a huge Jane Austen fan fiction community out there. Once I did, I started to post stories on A Happy Assembly. It was getting near to Halloween, and I thought I would write a short story, Mr. Darcy on the Eve of All Saints’ Day, pretty much as a goof because I knew nothing about werewolves (even though my daughter is a big werewolf/vampire fan). The story was so popular that readers asked me to expand it. It ended up being a full-length novel with a few new original characters introduced, including a lady and she wolf who very much wants Mr. Darcy for her own.

I did do some research on werewolves, but when I read that they dined on recently buried corpses, I decided to wing it because Mr. Darcy would never do something like that. Besides, he likes his meat fresh and from the wild. (Red deer is a particular favorite.) By the Regency Era, there wasn’t a wolf left anywhere in England. They had been completely eradicated by the time of Alfred the Great (about 900 A.D.). So, basically, I reintroduced the wolf to England and was happy to do so. I love wolves. 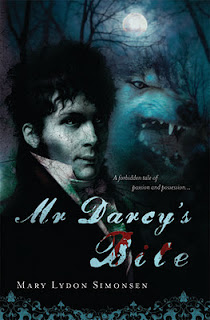 Although Mr. Darcy is a werewolf, Mr. Darcy’s Bite is really a love story. After months of calling on Elizabeth Bennet at Longbourn, Darcy decides to reveal his dark secret to Lizzy when she comes to Pemberley with Georgiana Darcy and Anne de Bourgh. Although furry, fanged, and four-footed, Mr. Darcy is true to Jane Austen’s character, and being a gentleman, he must inform Lizzy of what it will be like to be married to a man who howls at the moon, stalks deer, and grows a tail. At first she doesn’t believe him, but when she actually sees him as a wolf, she wants nothing to do with him. How can she love a man who is part beast?

While Darcy is romping around the woods of Pemberley, Anne and Georgiana are working on Elizabeth—trying to convince her that underneath that furry coat beats the heart of a man, and one who is very much in love with her. But even if Lizzy accepts him, there is the danger of discovery, and she must decide if she is strong enough to protect him because, if people learn of his dual nature, they will try to kill him.

What does Elizabeth Bennet decide to do? I hope you will want to read my novel and find out. Please tell me what you think about a furry Mr. Darcy.

P.S. I will be publishing a time travel novel in December, Becoming Elizabeth Darcy


Thank you, Mary!  I am always happy to see you here.


Please stop by next week for my review of Mr. Darcy's Bite!

What do you think, readers?   Can you buy Mr. Darcy as a werewolf?  And what other Austen characters, if any, would you like to see in the supernatural realm?

Hi Mary! Wow, a time travel P&P? That sounds really cool, I have yet to read one of those.

As for other Austen characters as supernatural beings...hmm, I'd have to think about that one. I can see Lizzy as a little faery, out in the forest.

Hi Monica,
Thank you for stopping by. I'm glad that you agree about how terrific a time travel P&P sounds!

Hi Monica. Thanks for stopping by. How did you know. :)

Lori, It's good to be back at Psychotic State. I'm at the JASNA AGM in Fort worth with 600 other Austen fans. Just met (in person) Sharon Lathan, Cindy Jones, and Abigail Reynolds. Yippee! Mary Simonsen