Book Review: DEATH ON A HIGH FLOOR by Charles Rosenberg 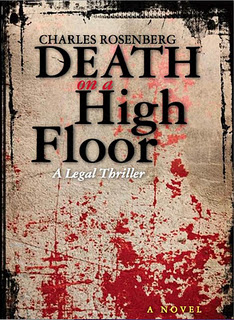 BOOK DESCRIPTION:  When much-despised Marbury Marfan senior partner Simon Rafer turns up dead, with an ornate dagger buried between his shoulder blades, it comes as a surprise to no one. Rafer had recently been on the warpath, clearing out the "dead wood" partners from the firm, not to mention any associate who dared cross him. A thousand attorneys, scattered across four continents, had good reason to want Rafer in the ground, but homicide Detective Spritz has his eye trained on only one--senior partner Robert Tarza, with his shadowy connection to a rare and infamous ancient coin. Robert and his friend and colleague--and maybe a bit more--Jenna are soon forced to play detective themselves, in a race to find the real killer or killers before Spritz assembles what looks to be an airtight case. But in the end, only Jenna's trial skills will stand between Robert and a free room at San Quentin.

If Death on a High Floor is any indication of author Charles Rosenberg's future efforts, Scott Turow and John Grisham should be prepared to admit one more to their club.

Yes, Death on a High Floor was that good.  This book was highly addictive from page one, an absorbing and all-consuming legal thriller extraordinaire that manages to stay fresh and exuberant and avoid being just another entry in the genre.  Despite the opening murder, and the "whodunit" aspect, this is - - surprisingly - - a fun book.  There is definitely a mystery involved, as well as the pressure on main character Robert to find out who really killed the much disliked Simon in order to save his own skin, but the ride to the conclusion proves to be an enjoyable one.

I liked Robert as the slightly intrepid (at least when it comes to matters where he is the client) sleuth, not always so deftly attempting to clear his own name while tracking down an actual killer.  He isn't your garden variety hero, a serious and sixty-ish attorney, but he works.  And he works well with the younger and sassier senior associate Jenna, who wants to see justice done as much as she'd like a partnership.

The chemistry between Robert and Jenna was entertaining and, oftentimes, amusing.  Theirs wasn't a romantic chemistry but the sort that produces the type of banter found between siblings.  I must say that it was a refreshing change to not have a love interest/romance side story to plump up the plot or push the story along.

Not that it would have been needed here.  The story moved along at a generous and steady pace, with little drag time.  While at first glance the book can seem a bit thick and even overwhelming for the less eager reader, Death on a High Floor will move at such a pace and so captivate you that you will reach the conclusion before you know it, grateful and happy to know the resolution and ending but sad that the story has ended.

This is author Charles Rosenberg's debut fiction work (he has written nonfiction works previously) and he comes out of the gate a winner.  Being an attorney himself, he has written what he knows and his expertise allowed him to fluently describe the inner workings of a high powered and prestigious law firm - - the "high floor" type of firm, as described in the title - - as well as the mechanics of the courtroom and trial preparation.  Those scenes were realistic and I especially appreciated seeing the courtroom from Robert's point of view as a defendant, rather than attorney, but with an attorney's mentality and vision.

Mr. Rosenberg's greatest strength, in my opinion, is his dialogue.  Always crisp, sharp and engaging, not only do the exchanges bring the already brilliant characters to supreme fruition but they make Death on a High Floor nearly impossible to put down.  It's well written, entertaining and includes a nice subplot on rare coins and coin collecting.

If you enjoy legal mysteries and thrillers, I would not hesitate to recommend Death on a High Floor.  With the holidays fast approaching, it makes not only a nice gift but a perfect airplane/vacation read - - although in substance, it is much more than that.

Death on a High Floor is available for purchase at major booksellers now, including Amazon.  I am an Amazon affiliate. If you make a purchase through my link, I will receive a small commission.

In celebration of Charles Rosenberg’s new release, he will be appearing at  Pump Up Your Book’s 1st Annual  Extravaganza Facebook Party on December 16.  More than 50 books, gifts and cash awards will be given away including a paperback copy of of Death on a High Floor!  Visit the official party page here!

With thanks to Pump Up Your Book for including me on this virtual tour!

Upcoming Virtual Tour Stops for Death on a High Floor:


Chat with Chuck at Pump Up Your Book December Authors on Tour Facebook Party!

Email ThisBlogThis!Share to TwitterShare to FacebookShare to Pinterest
Labels: Charles Rosenberg, Death on a High Floor, Pump Up Your Book