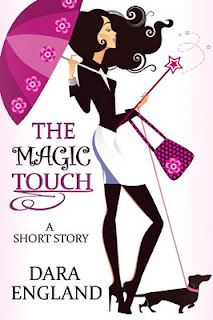 Fairy godmother Ambrielle is having an off year. Placed on probation by the fairy council, she’s going to have to perform a miracle in twenty-four hours in order to stay in the godmothering game. Her assignment? To help a reluctant young bachelor woo back his ex-girlfriend while turning his failing career around. But with her stubborn charge fighting her at every turn and her godmother license on the line, is Ambrielle about to lose her first battle? One thing’s for sure, she’s not going to hang up her wand without a fight.


The Magic Touch by Dara England is a fun little book - - but keep that in mind.  It's a little book.  It's described as "a short story" on the cover and a "novelette" elsewhere and neither description is an understatement. In fact, the brevity of the story is its sole weakness in my opinion.  In a tale that can be read in half an hour or less there is little time to delve into the characters' backgrounds, motives and personalities - - which is truly a shame in this case because both Ambrielle, the fairy godmother, and Danny, her stubborn male assignment, were ripe for more inspection.

The reader is given some basic background on Ambrielle and I would have thoroughly enjoyed chapters on her backstory, as well as the other fairy godmothers she references.  Some are traditional, some are modern, some are hippies - - what fun it would have been to read about them in their element.  I also would have appreciated more of Ambrielle's attempts with Danny and her taking over his apartment and life while she was turning his life around.

Danny too had a backstory but we were provided precious little of it.  Due to the nature of the short story, we entered the tale after Danny had already lost his girlfriend and his job was the pits.  If The Magic Touch was an average length novel we may have been able to meet Danny prior to his breakup and actually learn to care about him through his travails.  We may also have been able to meet Charlotte, his girlfriend, and know more about her - - anything about her, actually - - other than she was Danny's girlfriend.

I also would have liked to been privy to the results of Ambrielle's work at the conclusion of the story.

All that said, was there any benefit to The Magic Touch?  Absolutely!  I loved the fairy godmother concept and I was delighted that Ambrielle wasn't the stereotypical fairy godmother of lore but rather a young, modern day version.  She didn't wear a big pastel colored ballgown or wings and her magic wand was cleverly disguised in her handbag.  Danny didn't take her at her word and accept the fairy godmother angle immediately and Ambrielle had to prove her worth to him.

In short (pun fully intended), the overall concept of The Magic Touch was a good one, if not wholly original.  It made for a cute and quick read and one that left me wishing for more.  More fairy godmothers, more Ambrielle and more on Danny's future after his fairy godmother's interference.  Maybe Ms. England will be listening and will expand the story?

The Magic Touch is available for purchase as an e-book for the Kindle at Amazon.  I am an Amazon affiliate. If you make a purchase through my link, I will receive a small commission.


FTC Disclosure:   This book came from my own personal collection.  I was neither compensated nor paid in any way for this review.

Glad to hear this isn't bad. I snatched it up for free last week. Great review.

Hi Juju!! I hope you enjoy this as well. It's a fun little book if you're looking for a quick and harmless read.
Happy Wednesday!