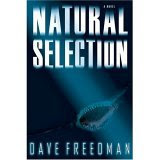 BOOK DESCRIPTION:  A shocking biological discovery.  A previously unknown predatory species.  Evolving just like the dinosaurs.  Now.  Today.  Being forced out of its world and into man's for a violent first encounter.


Weaving science and thriller in a way not seen since Jurassic Park, Natural Selection introduces a phenomenally dangerous new species that is rapidly adapting in a way never before seen.  A mystery.  A chase.  A vast expansive puzzle.  A team of marine scientists is on the verge of making the most stunning discovery in the history of man.  In their quest for answers, they engage a host of fascinating characters.  The world's premier neurology expert.  A specialist on animal teeth.  Flight simulation wizards, evolution historians, deep sea geologists, and so many more.  Along the way, the team of six men and women experience love, friendship, loyalty and betrayal.  Together, they set off to exotic locales.  Literally to the bottom of the ocean.  To a vast and mysterious redwood forest.  To an unknown complex of massive caves.  When people start dying, the stakes are upped even further.  Then the real hunt begins . . .


My Review
I read a lot of books.  A lot.  Even before I began reviewing them, I always had a book in my hand or in my bag.  True crime is among my preferred genres.  I don't scare or get freaked out easily.  Natural Selection scared me.  More than once I found myself actually speaking to a character, saying "No!  Don't go there!" or "No!  Don't touch it!"  If I could have continued reading with my hands over my eyes, I think I would have.

Natural Selection is a cyclone of crazy action, biological discoveries and academia and a very well thought out "what if" involving nature that rivals Jaws.  It's a fast paced and gripping horror story involving flying predators - - imagine Jaws in the air, if you will.  I was utterly obsessed and I loved it.

I have no idea whether or not the science that Mr. Freedman mentions is factual or even plausible and, frankly, it's irrelevant because the story is just so damn good.  It will make you really wonder what exactly lives in the deepest depths of the ocean or the furthest corners of the forests that we know nothing about - - and when and if those unknown species will choose to make their presence known to us and how they will do it.  Read Natural Selection and this thought will give you chills.

Oftentimes books like this will have fairly expendable and tertiary characters - - much like watching a slasher film, I can usually pick them out quickly, dubbing them "Victim" because their presence will be limited and their only real role is to be fodder for the villain/antagonist.   Natural Selection has a strong and solid cast of characters, ones that are all relevant to the story and some that you will  genuinely care about.  Worrying about their fates,  and having them pitted against methodical killers, make this book a real nail biter.

Has Hollywood heard of this book yet?  It would be a fantastical summer blockbuster.  Until that time, though, get yourself to your local bookseller and pick up a copy of this book.  You won't regret it.


Natural Selection is available for purchase at major booksellers now, including Amazon.  I am an Amazon affiliate.  If you make a purchase through my link, I will receive a small commission.