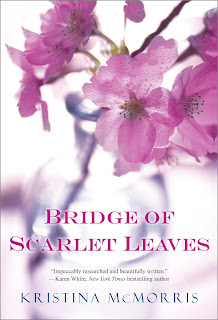 BOOK DESCRIPTION:  Los Angeles, 1941. Violinist Maddie Kern's life seemed destined to unfold with the predictable elegance of a Bach concerto. Then she fell in love with Lane Moritomo. Her brother's best friend, Lane is the handsome, ambitious son of Japanese immigrants. Maddie was prepared for disapproval from their families, but when Pearl Harbor is bombed the day after she and Lane elope, the full force of their decision becomes apparent. In the eyes of a fearful nation, Lane is no longer just an outsider, but an enemy.

When her husband is interned at a war relocation camp, Maddie follows, sacrificing her Juilliard ambitions. Behind barbed wire, tension simmers and the line between patriot and traitor blurs. As Maddie strives for the hard-won acceptance of her new family, Lane risks everything to prove his allegiance to America, at tremendous cost.

Skillfully capturing one of the most controversial episodes in recent American history, Kristina McMorris draws readers into a novel filled with triumphs and heartbreaking loss--an authentic, moving testament to love, forgiveness, and the enduring music of the human spirit.

Imagine, if you will, a book that is rich with historical fiction, ripe with sweet romance, containing a story that stays with you days after you finish it and will have you in tears and your heart alternately aching and full of joy.  This is a fair description of Bridge of Scarlet Leaves.

This is author Kristina McMorris' follow up work to her spectacular Letters from Home and she absolutely does not disappoint.  Like Letters, Bridge takes place during World War II and centers on a main heroine while telling the emotional story from a handful of voices.  Also like Letters, I found myself utterly engrossed in the story, the time period and feeling nostalgic as I flipped the pages and shared Maddie and Lane's lives.

While Ms. McMorris' debut work focused more on the war at home, this book goes for the jugular in its raw descriptions of the war, prisoners of war, lack of humanity and the underlying human spirit of compassion and generosity.  While the mental images are anguishing, the violence is not gratuitous and the language is not objectionable.  In fact, the tale is a stark reminder of how many men were lost to friendly fire and while being kept prisoners versus doing battle.

This area of history - - concerning the treatment of Japanese Americans here in the States and abroad in Japan - - I am not particularly well versed on and it was painfully enlightening to read of the discrimination and torn loyalties faced by so many.

I truly loved and related to the character of Maddie.  She was strong - - much stronger than she even knew - - and her enduring dedication to her husband, Lane, in the face of discrimination and disgust, even by those whom she previously considered friends before Pearl Harbor, was inspiring.  I was particularly touched by Maddie leaving the relative safety of her hometown in Los Angeles behind to voluntarily live in a war relocation camp.   The bleak circumstances of such relocations were told with frank honesty by Ms. McMorris and I found myself rooting for Maddie and Lane, desperate for them to stay together and prove all the naysayers wrong.

Much like Darcy and Elizabeth, Heathcliff and Catherine and countless others, the path to joy and romantic fulfillment is not a smooth and easy one.  Their struggles, set against the background of a quickly changing nation and world, centered and solidified the book and truly gave it heart. While I desperately wanted things to come together for them and quickly resolved, their challenges proved their spunk and tenacity, their deep loyalty and commitment and that, my friends, is what really defines a true literary couple.  These two defy the odds to stay together, even angering family and friends.  Ah, true love!

The supporting characters, too, were well defined and crucial to the story.  Ms. McMorris does a tremendous job in sketching out their backstories as well and I most particularly enjoyed the relatively small subplot involving baseball and the All American Girls Baseball League. Maddie's brother was probably the most important character behind Maddie and Lane themselves and his personal and emotional growth during  the book was inspiring.

As I did with Letters, I both loved and hated for the story to conclude.  I felt connected to these characters and I didn't want to leave them behind.  Bridge of Scarlet Leaves was a difficult book to put down and trust me when I say it's unforgettable.  I read a lot of books and while I can and do get passionate over books that move me, it's not often that a book brings me to tears.  This book brought me to tears and it touched my heart.

I would not hesitate to unconditionally recommend Bridge of Scarlet Leaves to any reader who appreciates historical fiction and/or realistic romances.  It is a top-notch work and I anxiously await future books from the talented Kristina McMorris.

Bridge of Scarlet Leaves is available for preorder now at major booksellers, including Amazon.  It is scheduled for publication on February 28, 2012.  I am an Amazon affiliate.  If you make a purchase through my link, I will receive a small commission.

Review copy of this book provided by the author in exchange for a fair and honest review.  In no way did the provision of this book affect the outcome of my review. 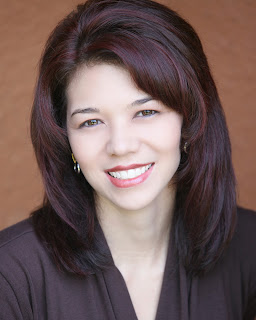 Kristina McMorris is a graduate of Pepperdine University and the recipient of nearly twenty national literary awards. A host of weekly TV shows since age nine, including an Emmy® Award-winning program, she penned her debut novel, Letters from Home (Kensington Books, Avon/HarperCollins UK), based on inspiration from her grandparents' wartime courtship. This critically praised book was declared a must-read by Woman's Day magazine and achieved additional acclaim as a Reader's Digest Select Editions feature, a Doubleday/Literary Guild selection, and a 2011 Goodreads Choice Awards semifinalist for Best Historical Fiction. Her second novel, Bridge of Scarlet Leaves (March 2012), has already received glowing reviews from Publishers Weekly and Kirkus Reviews, among many others. Named one of Portland's "40 Under 40" by The Business Journal, Kristina lives with her husband and two sons in the Pacific Northwest, where she refuses to own an umbrella.

Lori, thank you for this amazing review! I'm so flattered the story touched you, and even brought you to tears. More books on their way, I promise! :)

Kristina, it was my pleasure to write the review. I just loved the book. And I'm so thrilled that more books are coming! Hooray!