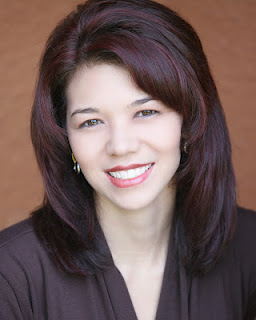 Today I am excited to welcome Kristina McMorris, author of Letters from Home and the newly released Bridge of Scarlet Leaves, to Psychotic State Book Reviews.  Welcome, Kristina!

You have written two of the most beautiful and heartfelt romances I have read.  Would you like to share how you were inspired to write each?


KM:  Wow, thank you so much, Lori!  Both books were actually inspired by true stories.  The premise of my debut novel emerged while I was interviewing my grandmother for the biographical section of a cookbook I was editing, full of recipes she had created and collected over decades, as a Christmas gift for the family.  It was then that she revealed the fact that she and my grandfather had dated only twice during WWII before they got married, their relationship having developed almost entirely through letters - - all of which she then pulled from her closet to share with me.

When I left her house that day I started o wonder how well two people can truly know each other through letters alone.  The thought sparked the idea for a book in which a soldier falls in love through a yearlong letter exchange, unaware the girl he's writing to isn't the one writing back.  This laid the foundation for what became my debut novel, Letters from Home.

As for my second novel, years ago an old family friend shared with me that he had fought for America while his brother served for Japan.  I was captivated by the thought.  But it wasn't until a decade later, when I'd found my calling as a writer, that I remembered his story and realized what an amazing premise it would make for a novel.  Combined with my undying love for the U.S. miniseries "North and South" (perhaps more for Patrick Swayze in uniform than anything else), I set out to write my book.  But in the midst of research, I happened across an obscure mention of roughly two hundred non-Japanese spouses who had chosen  live in the U.S. internment camps voluntarily.  I phoned my agent that very day and said, "This is it.  I have my story!"

Both Maddie from Bridge of Scarlet Leaves and Liz from Letters from Home are incredibly strong and resilient women - - how much of yourself did you write into their characters?


KM:  As you can probably guess, I'm a pretty strong-willed person myself.  I didn't intentionally fashion these characters to be a reflection of my personality, and in fact there are definitely some significant differences that exist.  Really, when it comes to infusing my own traits into my stories, there are parts of me sprinkled into every one of the characters - - even the guys!

Both books have a great deal of history in them.  How much research goes into writing a solid historical fiction work?


KM:  For Bridge of Scarlet Leaves, I did solid research for about five months before I started writing the book.  Since I'm not a big fan of traditional research, which of course is required for historical fiction, I opt for hands-on experience whenever possible.

Therefore, I was delighted when the Park Ranger at the Manzanar War Relocation Center, who suffered through my endless list of internment questions, invited me to attend their annual pilgrimage.  (Come to think if it, maybe that was his way of finally shutting me up!)  Similarly, when I contacted the Go For Broke Foundation, an organization devoted to educating people about Japanese American military service, they offered to arrange in-person interviews with seven WWII veterans who have since all received the Congressional Gold Medal.  I've definitely been spoiled.

As for my Air Corps research, it's hard to beat the thrill of flying on a restored B-17 bomber.  For that one, I have my husband to thank.  It was by far the best Mother's Day gift I could imagine!

Bridge of Scarlet Leaves deals with an aspect of World War II that is glossed over during history class - - the treatment of Japanese Americans here in the States after Pearl Harbor and the result, especially on marriages between Japanese Americans and Americans.  Was this difficult to write? How did you decide to center your book around it?


KM:  Since my father is an immigrant from Kyoto and my mother is a Caucasian American, I grew up living between the two worlds.  Both sides of the family eventually grew to accept my parents' marriage, but in the beginning there was some strong resistance.  My maternal grandfather had, after all, served in the U.S. Navy in the Pacific during WWII.  Drawing on these experiences, I was able to weave in the unique pespectives with which I was raised.

You took quite an interesting path to becoming a published author.  Host of a children's program, acting, wedding event planning - - wow!  Care to share any fun tidbits about these jobs?


KM:  Oh goodness, I could probably write a whole book about the amusing things that happen while coordinating weddings.  Looking back, one of the funniest incidents was when, give minutes before the ceremony, all of the men in the wedding party sat down on an outdoor bench covered in sap.  My assistant ended up giving the backside of their tuxedo pants a swift wipe with a wet rag, then I followed up with a dry rag before immediately cuing them to walk in the procession.

Are there any eccentricities to your writing habits?


KM:  I didn't realize this until my husband pointed it out a few years ago, but I mumble as I write.  I have to say the words aloud in order to hear the cadence and to ensure that the dialogue sounds realistic.  If a stranger walked by, I'm sure I'd look like a crazy person.

How about your writing space - - dedicated or on the fly?  Organized or controlled chaos?

KM:   My office, where I used to write, is pretty organized.  Now that I have a good laptop, I can't seem to pry myself off the comfy couch in the living room when writing fiction these days.

Are there authors you enjoy reading when you are not writing yourself?


KM:  Some of my favorite novels include The Book Thief by Markus Zusak, Between Shades of Gray by Ruta Sepetys, The Taker by Alma Katsu, Water for Elephants by Sara Gruen, and Those Who Save Us by Jenna Blum.

Now for some random questions . . .

Man in uniform . . . police officer, firefighter or military?
Military, hands down.  I write WWII, after all!

Weirdest celebrity couple in your opinion is?
Although they're no longer together, I have to say I'm still most bewildered by Angelina Jolie and Billy Bob Thornton.

If you could meet one author, living or deceased, for coffee it would be . . .
Shakespeare - - to find out who really wrote his plays.  :)

The most underrated book you've read?
Thank goodness nothing comes to mind.  Each of my all-time favorite books have fortunately received their due praise.

The one item you simply could not do without in your daily life is?
My laptop.  I think I'd feel lost without it - - although I'd probably get more laundry done.

One vintage item you wish would rotate back into fashion is?
I love the 1940s hats, from pillbox and large-brimmed ladies' hats to men's tweed caps and classic fedoras.

Your ideal day would be . . .
Writing THE END on the next novel, which I have yet to start, then celebrating with my kids and husband over an Italian meal and Tiramisu.

One piece of advice to struggling writers would be . . .
When it comes to surviving the submission process, remember that it only takes one!  As for craft, treat critiques like a cafeteria line:  pick and choose what works for you.  Be true to your voice and your story.  And don't let anyone edit out what is uniquely yours.  (I realize that's more than one piece of advice, but hey, it's one paragraph).

What's on the horizon for Kristina McMorris?  Any future books?

KM:  Up next, my novella, The Christmas Collector, will be released in October in a holiday anthology titled A Winter Wonderland, headlined by Fern Michaels.  In this contemporary story, Jenna Matthews, the daughter of a former hoarder, seeks catharsis through her career as an estate liquidator.  However, while preparing for a sale just before Christmas - - a season of "junk" exchanges she despises - - she stumbles upon a shoebox of wartime memorabilia that reveals the secret past of an elderly woman (her young version is a minor character in Letters from Home), and soon leads Jenna on a hunt to understand the true value of keepsakes, holidays and memories.

Other than that, I have two more novels on contract with my publisher.  The first one is tentatively titled Through Memory's Gate, which I'll be diving into as soon as the whirlwind of my current book tour settles.

Lastly, if you could use one word to describe Bridge of Scarlet Leaves, what would it be?

Thank you so much, Kristina, for taking the time to answer my questions.  Best of luck to you with the wonderful Bridge of Scarlet Leaves!


What do you think, readers?  Do you love a man in uniform?  Is North and South your cup of tea?.  And what vintage item do you wish would rotate back into fashion?  (My answers:  Yes!  I am married to a military man.  Always loved North and South.  Patrick Swayze was terrific - - .and in uniform!  I always loved the women's lounging pajamas of the 30s, as well as those gorgeous evening gowns!)