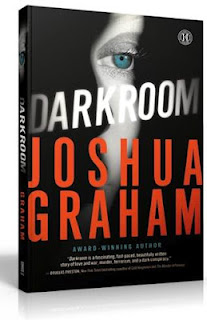 BOOK DESCRIPTION:   After scattering her mother's ashes in Vietnam, photojournalist Xandra Carrick comes home to New York to rebuild her life and career. When she experiences supernatural visions that reveal atrocities perpetrated by American soldiers during the Vietnam War, she finds herself entangled in a forty-year-old conspiracy that could bring the nation into political turmoil. Launching headlong into a quest to learn the truth from her father, Peter Carrick, a Pulitzer Prize Laureate who served as an embedded photographer during the war, Xandra confronts him about a dark secret he has kept--one that has devastated their family.
Her investigations lead her to her departed mother's journal, which tell of love, spiritual awakening, and surviving the fall of Saigon.
Pursued across the continent, Xandra comes face-to-face with powerful forces that will stop at nothing to prevent her from revealing the truth. But not before government agencies arrest her for murder, domestic terrorism and an assassination attempt on the newly elected president of the United States.
Darkroom is a riveting tale of suspense that tears the covers off the human struggle for truth in a world imprisoned by lies.


Show More
My Review
Last year I was fortunate enough to read and review author Joshua Graham’s extraordinary freshman effort, Beyond Justice, which proved to be one of my favorite books of the year.  I was impressed with his ability to take what could have been a stock storyline and mix things up, to make me really feel and connect with his characters.  My literary luck continues this year as Mr. Graham’s follow up work, Darkroom, demonstrates that Beyond Justice was not a one-hit wonder and Joshua Graham is an author to watch out for.   Darkroom is just as good as Beyond Justice, although in a very different vein.

Rather than being told from the viewpoint of one central character, Darkroom introduces us to a handful of characters, all of whom will eventually come together for a heart pounding and thrilling conclusion.    It is a slick and nuanced ensemble tale of a conspiracy that goes back decades.  As the mystery unravels, it threatens to impact and/or destroy the lives of all the characters that Mr. Graham so deftly weaves throughout this tale.  Writing a novel with a large cast of characters, a handful of whom are narrating the tale, is never an easy task but he seems to effortlessly intertwine their stories.

I found heroine Xandra to be a strong, relevant character that I could relate to, and one that was, at times, painfully human and vulnerable.  Her strength, along with portions of her grief, simply radiate from the pages.  She will touch any reader who has lost a parent, or who is struggling to find a connection with a family member.  I particularly liked how savvy and resourceful she was - - no shrinking violet here.

I also found several of the supporting characters to be particularly praiseworthy and enjoyable.  Even those characters that weren’t the nicest of the bunch were so well developed and interesting that I couldn’t wait to get back to them.  Surprisingly, there wasn’t a weak character or plotline in the bunch, quite a feat when you’re dealing with an array of vastly different characters with very unique voices.

As with Beyond Justice, a dash of the paranormal is thrown into the mix along with questions and uncertainty of faith.  I hesitate to call Darkroom a work of Christian fiction, as I think the book is more than just a work on Christian beliefs and demonstrates the resiliency of the human spirit and most importantly, hope.  As a reader who enjoys the paranormal/supernatural genre, I enjoyed those paranormal aspects of the book, as well as Mr. Graham choosing not to put forth a cut and dried explanation for all the events.

Fans of historical fiction will appreciate Mr. Graham’s use of actual events to build and base his work, as he describes the realities and horrors of the Vietnam War and its aftermath.  I knew only the basic facts of Vietnam prior to picking up this book and was shocked by some of the fictional recounting I read, knowing that Mr. Graham did use history as a basis.

Fans of conspiracy theories will not be disappointed or find this book lacking in the least.  At its core, Darkroom is a twisted tale of conspiracies and proves to be powerful and rewarding to the reader who likes their books with action, intrigue and secrecy.

Mr. Graham’s writing is tight and seamless and he proves, once again, that he’s a gifted author with wonderful storytelling abilities.  He has kept the chapters relatively short and by telling his tale with a handful of diverse voices, all done extremely well, Darkroom moves at a frantic and suspenseful pace.

As he did with Beyond Justice, Mr. Graham immediately grabs hold of the reader with the tenacity of a pit bull and will not let go until you have read every last page and emerge exhausted and happily satiated from this astonishing ride.  You will be so invested in these characters, so riveted by the story and events, that your life will be hijacked by Mr. Graham’s plot.

Besides the superb plot, excellent writing and well fleshed out characters, Darkroom really excels in the plethora of twists and turns thrown at the reader.  Don’t expect to know where Mr. Graham is going to take you on this journey because you are guaranteed to be thrown a curveball.  Several times throughout the reading of this book I gasped out loud and uttered cries of “Oh no!” and “I can’t believe it!”  For a book aficionado, especially a hardcore reader like myself who has likely read it all, this is absolute literary nirvana.

I would not hesitate to recommend Darkroom without reservation to any book lover.  You won’t be disappointed and you will find yourself anxiously awaiting Joshua Graham’s next foray into the literary world.

Darkroom is available for purchase now at major booksellers, including Amazon.  I am an Amazon affiliate.  If you make a purchase through my link, I will receive a small commission.


Review copy of this book provided by the author in exchange for a fair and honest review.  In no way did the provision of this book affect the outcome of my review.

Thank you so much for this kind review. DARKROOM is available for Kindle
and Barnes & Noble/Nook

I'd love to hear from everyone, so please feel free to reach out to me on facebook, my blog, or twitter: @j0shuaGraham