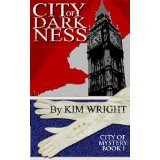 BOOK DESCRIPTION:  City of Darkness takes place in 1888 London, where Jack the Ripper roams the streets with impunity and Scotland Yard seems helpless to stop him.

The science of forensics is in its infancy but a few detectives – Trevor Welles among them – recognize that they are dealing with a different sort of killer, a “modern criminal” who chooses his victims at random. If Jack is to be caught, he won’t be caught with Scotland Yard’s normal methods of deduction for there is no logic to this madness. The question is no longer “Why was the victim killed?” but rather “How was the victim killed?” For the first time in the history of detection, science is trumping deductive reasoning.

When a twist of fate puts Trevor in charge of the case, he hastily assembles Scotland Yard’s first forensics team: Davy Mabrey, the first bobby on the scene of the grisliest of the murders, whose working class common sense proves an invaluable asset, Rayley Abrams, a cautious intellectual whose future at the Yard is marginalized due to his Jewish heritage, Tom Bainbridge, a medical student with aristocratic connections and a secret drinking problem, and Emma Kelly, sister of the Ripper’s last victim who has a troubled past and a gift for linguistics. The team finds an unlikely ally in the form of Queen Victoria herself, who takes an unusual level of interest in the Ripper case and secretly funds the unit. But will they stop Jack in time to spare Leanna Bainbridge, the young heiress with whom Trevor has fallen madly and improbably in love?

For a bibliophile like me there is nothing so exciting as a book that causes my pulse to race,  gets me so deeply involved with the characters and the story that I stay up late and push my lunch hour to read, and generally am consumed.  City of Darkness was one of those books.

How can I express how much I loved this book?  I am almost disappointed that I have read it and I don't have the delight of picking it up again for the first time and becoming a passive bystander to the London streets of 1888.

Author Kim Wright has taken a string of famous unsolved murders - - what may be the first known serial killer and perhaps the most notorious unsolved crimes in history - - and applied a very swift and talented hand to them, to create a fascinating blend of historical fiction, mystery and intrigue.    She does a splendid job of capturing the grime, desolation and general depression of the Whitechapel streets inhabited by London's poorest, as well as a glaring disparity between the underprivileged and the well-to-do that reside only a short carriage ride away.

While Leanna Bainbridge turned out to be a strong and willful heroine (very much unlike what proper Victorian ladies were to be) and I liked her very much, the heart of the story for me was carried by Trevor Welles.  He was quick and smart, without being pretentious, and determined to stop Jack the Ripper's reign of terror, regardless of his choice of victim.  He was a fascinating central character as he was not a dashing hero (you will find no Mr. Darcy here) and he had no serious romantic entanglements to add allure.  Yet his tenacity, his devotion to the job and foresight to move science to the forefront made me adore him.

Another character I loved sharing the pages with was Aunt Gerry, most definitely an anomaly for the Victorian era, an eccentric spinster by choice who traveled to safari on her own and wasn't shy about speaking her mind.  She was such a bold and vivid character, I could see her in my mind and hear her speaking as I turned the pages.

Ms. Wright pens villians with broad strokes and it's to her credit that I thoroughly disliked one or two characters with a passion!

The forensic portions of the book were intense and very satisfying.  It was remarkable to read of the early crime-scene "investigations" which amounted to little more than washing the blood from the streets, identifying the victim and photographing the victim's eyes as it was believed then that the last images the deceased saw would be forever seared on their eyes and could be captured by camera.  Equally fun was to read of Trevor's ideas and suggestions, knowing how different crime detection would be in the next century.

As a self-admitted true crime junkie, I always dive head first into books like City of Darkness but can also be very critical.  You will find no criticisms from me with regard to this book.  Ms. Wright stayed true to history and true to the facts of the actual Ripper cases.  She gave a real voice to the Ripper's last known victim, Mary Kelly, even allowing the reader to follow her into her world, complete with leering looks, exchanges of soup for skin and a love of reading.  She even gave Queen Victoria, notorious for her modesty, a cameo.

I did like how Ms. Wright wrapped the story up and I was pleased with the subject she named as the infamous killer - - a suspect that was mentioned in Scotland Yard's papers from the original investigation.  It was welcomed that she did not create a fictional character to take the heat but rather chose an actual person that she believed was likely the Ripper after her own research.

If you like true crime, especially unsolved true crime, I guarantee you will enjoy City of Darkness.  If you are a fan of Victorian mysteries, look no further as this book will satisfy your craving.  I would not hesitate to recommend City of Darkness without reservation.  It is easily one of the best books I will read this year.

I am thrilled that this is the first book in a new series called City of Mystery.  I anxiously await the next books in the series.

City of Darkness is available for purchase now at Amazon. I am an Amazon affiliate. If you make a purchase through my link, I will receive a small commission.

Review copy of this book provided by the publisher in exchange for a fair and honest review. In no way did the provision of this book affect the outcome of my review.
Posted by Lori Johnston at Friday, June 08, 2012