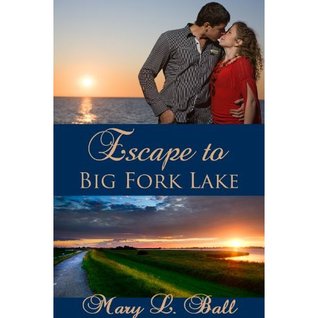 Will an inheritance bring new happiness or a trap for murder?  Bad luck seems to follow Sam Blacker.  She loses her job and faces daily struggles to keep her drunken neighbor away from her.  When an unexpected inheritance gives her a chance for a new beginning, Sam, a city girl at heart, is hesitant.  However, after a brutal attack she has no choice.  Making a decision that will forever change her life, she flees to the small fishing town of Big Fork Lake, Alabama and soon finds herself in the arms of Noah Frye.  A tumultuous relationship with Noah sparks buried desires of the heart, even if he is a Christian, surely she can get around that little problem.  As Sam and Noah's passion grows, trouble lurks in the shadows . . . waiting and watching.  Inescapable, Sam's bad luck returns when she stumbles upon a murder and becomes the only suspect.  Will she have to run again, this time to stay out of prison?  Worse, will she lose the best man she's ever found?  And what about the newfound hunger in her heart to know God?  Can she truly trust in Him?


My Thoughts on Escape to Big Fork Lake
Escape to Big Fork Lake is a little bit country, a little bit mystery and a lot of small town romance.  In fact, the romance, along with small town life, is the best part of this debut work from author Mary L. Ball.
Touted as a Christian romance/suspense, I normally don’t read Christian fiction, although I have made a few exceptions.  This book doesn’t fit into my normal literary wheelhouse but I was not disappointed and found it a highly enjoyable, if somewhat predictable, read.   For those readers who appreciate the Christian fiction genre, Escape to Big Fork Lake will be a welcoming tale of inspiration, morals and finding God’s love.  For readers who don’t care to have a strong religious message in their books, the general story, along with the light mystery, should be persuasive enough although the religious aspect is a major part of the book.


I was a bit confused about this book in the beginning.  I wasn’t sure I could identify with heroine Sam and I felt a few of her actions were off and plot driven.  The character of Rob seemed a bit cliché and I thought the story could have moved along nicely without him or the situation involving him, although later on in the story he did have more of a potential focus.  I had actually forgotten the story was going to have a suspense angle by the time Sam left the city of Atlanta to head to Big Fork Lake, Alabama.  This is when the story really took flight.
Once Sam arrived in Big Fork Lake, I liked her.  She came to us full of flaws and took a less than smooth voyage of self-discovery throughout the course of the book.  She turned out to be much more of a fighter than I figured her for at the beginning of the book and I was very satisfied with her at the conclusion.


The same can be said for Noah.  I liked him immediately and immediately recognized that he would be Sam’s love interest.  It was refreshing in this Fifty Shades of Grey saturated market to read of a man who truly courts a woman, in every old-fashioned sense.  Their romance is sweet, leaving the reader with a warm longing for this innocence.  Noah was an honest, upstanding man with no apparent issues and baggage - - exactly what Sam needed.
The character of Bo is a vital one, although we never actually meet him.  Only in flashback and when Sam arrives at his former home and business can we piece together something about this man and his character and it becomes quickly apparent that he is the heart that drives Escape to Big Fork Lake.  A selfless and basically simple person, even though he is gone before the story starts, he was a favorite character.


The mystery was on the light side, more a cozy type, and I had it figured out before it was officially cracked but the mystery was really secondary to the romance and the path was still enjoyable to take.
If there was any fault I could find with Escape to Big Fork Lake, it’s a relatively minor one.  I do wish the facets of small town life were explored in more detail.  Sam moved from a big, bustling city and I would have liked to have seen her transition as an outsider to a very small town more clearly. I think it would have been fun to have had more “town regulars” that were featured as the cast of characters was a relatively small one.  I also would have liked to have seen Sam’s struggle or train to learn the inn and restaurant business as that appeared a bit glossed over but again, minor issues.


Overall, I found Escape to Big Fork Lake a pleasant and gratifying diversion with an uplifting message and a feel-good conclusion.  I wouldn’t hesitate to recommend it to readers looking for a clean romance and/or light mystery.  It’s a good, solid debut work from Mary L. Ball and I look forward to future works by her.
Escape to Big Fork Lake is available for purchase now at major booksellers, including Amazon.  I am an Amazon affiliate.  I will receive a small commission if you make a purchase through my link.


For information on author Mary L. Ball, please visit her website.
Review copy of this book provided by the author in exchange for a fair and honest review.  In no way did the provision of this book affect the outcome of my review.


With thanks to The Writers Lounge and Tom Riddell for including me on this book tour!