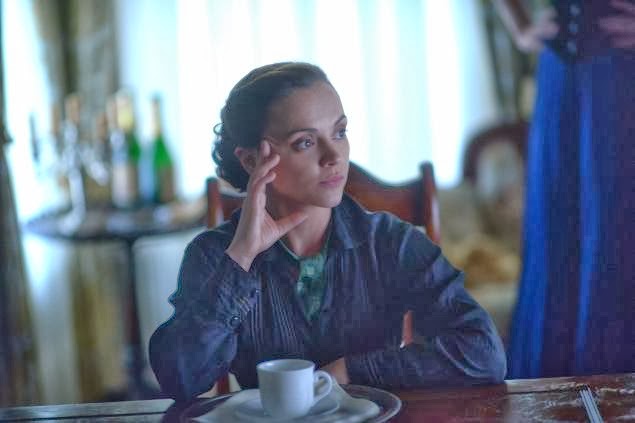 Boy, Lifetime has been on a roll, haven't they?  First, they remade the gothic and camp classic Flowers in the Attic.  Now they have turned their sights on a murder mystery from 1892, the classic Lizzie Borden case.

Maybe "mystery" isn't the best word since there is about as much mystery surrounding who killed Andrew and Abby Borden as the O.J. Simpson drama.  But the Borden case most definitively ranks as a classic true crime although Lifetime leaves no "whodunit" aspect standing.

Elizabeth Montgomery, daughter of Hollywood stalwart Robert Montgomery and of Bewitched fame herself, played the allegedly spree-killing spinster in a 1975 made-for-television movie and America was shocked.  Not only that the sweet and sublime Samantha Stevens was on our small screens wielding an axe with deadly intent but (gasp!) that she did it in the nude!  What would Darren think?  Getting past that shocking concept (it was 1975 after all), Ms. Montgomery gave a standout performance on an individual upon whom not a lot is firmly known.  The Borden crimes and following court trial happened long before CourtTV, the internet and cellphones.  The few surviving accounts of what the real Lizzie Borden was like must be taken with a grain of salt since the accounts were given and taken before, during or after her trial and even fewer surviving photographs of the infamous Fall River resident.  Ms. Montgomery managed to make her Lizzie interesting, frightening and compelling.  I wish I could say the same for Christina Ricci's performance.

Don't get me wrong - - Ms. Ricci's performance wasn't bad.  But it wasn't particularly good either.  Maybe she was as unsure as the viewer was as to whether this should have been a serious look at the case or campy fun.  I know I was.

Despite her small stature, Ms. Ricci could have really worked it as Lizzie.  (The real Lizzie Borden was apparently taller and larger boned than the diminutive Ricci).  Her large eyes can convey very intense emotions.  (Look at how creepily she portrayed Wednesday Addams in The Addams Family films).  Something seemed lost in the translation though.  Was Ricci as Lizzie a deviant and greedy sociopath or was she having a temper tantrum?  Her scenes with her on-screen father Andrew were especially disturbing, given how many theories have been floating around as to the exact nature of their "closeness" but Lifetime chose not to fully go there and only provide some conjecture.  It may never be known whether or not there was incestuous acts going on in the Borden home but either give us the entire serving or take it off the menu.

The scenes with her on-screen mother were exceedingly brief and the casting was poor - - not because of any acting inadequacy on the part of the actress but because the real Abby Borden was a short, stout woman, unlike her portrayer.

Of special disappointment to me was Clea DuVall, normally flawless in her roles, but as bland as rice pudding here.  While Lizzie's sister Emma did only have a supporting role in the actual story, DuVall is so meek she's practically nonexistent.  Maybe if DuVall had been cast as Lizzie, it would have spun the entire production around.

The worst part of the entire endeavor was the soundtrack.  Yes, the soundtrack.  This Lizzie Borden was set to metal and grunge rock and it completely took me out of the story.  Was this a recounting of life and crimes during the Victorian era in America or outtakes from a music video?   Was this director Nick Gomez' attempt at being edgy or was he trying to woo a teen audience?

The Borden case is an incredibly interesting one, given the times, the victims and the assumed perpetrator, as well as the notion at that time by the all-male jury that a woman simply would never and could never strike anyone multiple times with an axe.

Of course today we know that women can and have killed persons as viciously as men have.  This production clearly believes that Lizzie Borden was indeed guilty of slaughtering her father and stepmother, whether for financial gain, freedom or due to mental illness - -  or a combination of all three - - and I agree that in all likelihood she was guilty.  But this version of Lizzie takes all the guilty fun out of arriving at that verdict.

If you're looking for a solid recounting of the Borden case, find Elizabeth Montgomery's 1975 version.  Lizzie Borden Took an Axe has poor production and poor directing choices and deserves a good whacking.