Audiobook Review: STORIES I ONLY TELL MY FRIENDS: AN AUTOBIOGRAPHY by Rob Lowe 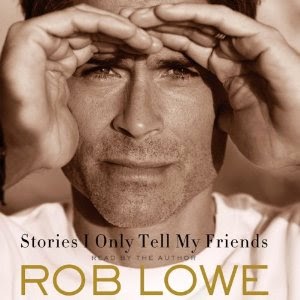 Description:   A wryly funny and surprisingly moving account of an extraordinary life lived almost entirely in the public eye.

A teen idol at 15, an international icon and founder of the Brat Pack at 20, and one of Hollywood's top stars to this day, Rob Lowe chronicles his experiences as a painfully misunderstood child actor in Ohio who was uprooted to the wild counterculture of mid-70s Malibu, where he embarked on his unrelenting pursuit of a career in Hollywood.

The Outsiders placed Lowe at the birth of the modern youth movement in the entertainment industry. During his time on The West Wing, he witnessed the surreal nexus of show business and politics, both on the set and in the actual White House. And in between are deft and humorous stories of the wild excesses that marked the 80s, leading to his quest for family and sobriety.

Never mean-spirited or salacious, Lowe delivers unexpected glimpses into his successes, disappointments, relationships, and one-of-a-kind encounters with people who shaped our world over the last 25 years. These stories are as entertaining as they are unforgettable.

As a teen of the 80s, I was superficially familiar with Rob Lowe, the actor.  I knew him as Billy from St. Elmo's Fire, Sodapop from The Outsiders and a handful of other roles.  I knew him as the one-time boyfriend of Melissa Gilbert and Princess Stephanie of Monaco.  Who could forget the details of his sexcapades during the 1988 Democratic convention in Atlanta?  Not this former Atlanta resident.  I wasn't a fan but I wasn't opposed to him either.  He was just another Hollywood actor in my book, albeit a stunningly good looking one.

I purchased this audiobook for a road trip, thinking it would be entertaining and likely a piece of fluff.  Imagine my surprise when after listening to this audiobook, not only do I consider myself a fan of Mr. Lowe's but I can also add "author" to my mental description of him.

Put aside all of your previous opinions of this former (and, honestly, still) pretty boy and read or listen to this book.  It's worth every moment.  Mr. Lowe gives a painfully honest account of his background, from his family to his rise in Hollywood to his days of being in the Brat Pack.  He is never mean, he doesn't throw anyone under the proverbial bus but he also doesn't mince words or spare details.

He speaks openly about his dysfunctional early family life and his mother's myriad of quests for living all naturally (to the point of hysteria) and dealings with depression.   He talks of knowing from a very early age that he wanted to be an actor, but having a strong attraction to politics, and of arriving in Malibu and being an outcast for years.  Unlike today, back in the 1970s it was not cool to be an actor.  Even friends, and future thespians, Emilio Estevez, Charlie Sheen and the Penn brothers, were not necessarily the popular kids.

I thoroughly enjoyed Mr. Lowe's recounting of Malibu and Hollywood in the 1970s - - how fascinating was it to hear that he was present at one of very early shoots on the then unknown Star Wars?  That Charlie Sheen's first love wasn't acting but baseball and that he hoped to be drafted and play major league ball?  And that Mr. Lowe himself had already decided to throw in the towel on his minor career and attend college when he was cast in The Outsiders?

Did anyone know that Mr. Lowe and John F. Kennedy, Jr. had met and spoken about John's decision on marrying?  I certainly did not although Mr. Lowe begins his book with a recounting of meeting the one person he was most excited and humbled to meet - - yes, John F. Kennedy, Jr.  In Mr. Lowe's retelling, Kennedy is a down to earth, all around nice guy who loved the sneak peek he was given of The West Wing and demanded that Rob Lowe, and Rob Lowe alone, be given the cover of his new magazine George.  It is somehow shocking to know that Mr. Lowe was doing the same as the rest of the nation back in July of 1999 . . . waiting to hear news on the plane crash and being shocked and saddened over the loss.

Serious Rob Lowe fans may already know this but Rob Lowe has lived a heck of a life so far.  He has met scads of famous people, from trying to meet Telly Savalas (unsuccessfully) as a child in Ohio to getting future career advice from Liza Minnelli to the pre-career and teenage Darryl Hannah to the aforementioned Princess Stephanie of Monaco (whose lifestyle will make you scratch your head in wonder.) Despite the many connections, the women, the alcoholism and career success, Mr. Lowe manages to come across unscathed.  He's your next door neighbor, the father of a child in Little League, someone who is incredibly humbled by the good fortune bestowed upon him and who ultimately holds himself to a high standard.    Surely I wasn't the only one feeling triumphant over his comeback with The West Wing.

Perhaps this is the most surprising part of Stories I Only Tell My Friends. . . Rob Lowe can write.  No, really.  He is as blessed with the pen as he is with looks.  From the first chapter, his prose draws the listener/reader in, inviting you into his world and his story.  Listening to the audio version of this book versus reading it, I was privileged to hear his own voice and his incredible impersonations.  He is a gifted narrator, from the pleasantness of his voice to verbal inflections.  His impersonation of Tom Cruise had me giggling in the car.

There was one thing I didn't like about Stories I Only Tell My Friends and that was the book had to end.  It was so good and so enjoyable I did not want to part company with Mr. Lowe.   The upside is that he has generously written a follow up memoir, one I will be picking up to savor.

I would not hesitate to recommend Stories I Only Tell My Friends.  It's the perfect celebrity memoir -  interesting, fun and dishy without being catty or cruel.

FTC Disclosure: This audiobook is from my own personal collection and was purchased by me. I was neither paid nor compensated for this review. You're welcome.

Email ThisBlogThis!Share to TwitterShare to FacebookShare to Pinterest
Labels: Audiobook review, Rob Lowe, Stories I Only Tell My Friends