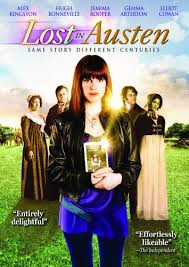 Movie Description:    Amanda Price is sick of the modern world. She yearns for the romance and elegance found in the books by her favorite author, Jane Austen. But she's about to get a rude awakening as one fateful evening, she is propelled into the scheming 19th century world of Pride and Prejudice while that book's Elizabeth Bennet is hurled into hers. As the book's familiar plot unfolds, Amanda triggers new romantic twists and turns within the Bennet family circle as she clumsily tries to help the sisters nab husbands and even captivates the tantalizing Mr. Darcy herself. But what about Elizabeth...and what will become of one of the world's greatest love stories?


My Thoughts on Lost in Austen

I want to love this movie.  I mean really love and flat out adore this movie.  It has Jane Austen, it has Pride and Prejudice, it has Elizabeth Bennet and Mr. Darcy and it has a modern girl transporting back to Regency England and into that amazing book.  Can't go wrong, correct?  Unfortunately, no.

Let's start with the good.  The concept is gold.  If you're a Janeite (like me), devoted to Pride and Prejudice (like me) and feel that Mr. Darcy is the greatest romantic character in literature (like me) you have fantasized about saying "screw it" to this modern world and waking up in Regency England to being Elizabeth Bennet and being courted by Mr. Darcy (like me).  So Lost in Austen is already ahead of the game because those bases are covered.   Amanda Price doesn't wake up in Regency England but rather finds a portal in her London flat that transports her to Longbourne, the Bennet home, while bringing Elizabeth to modern day London.  So far, so good.  Amanda escapes her apparent lackluster job and completely unromantic boyfriend (who drunkenly proposes to her with the tab from a beer can, ugh!) to stay with the Bennet family. 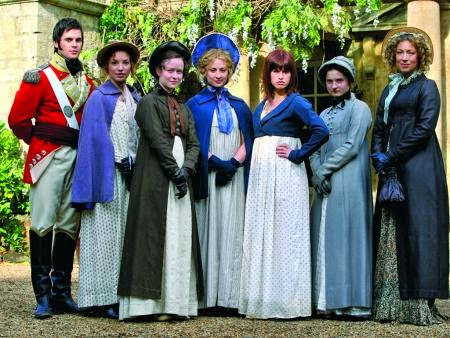 And this is the best part of the miniseries.  The crazy Bennet family and Amanda's culture shock over not only daily life during the Regency period but that this fictional family is apparently real.  This is also one of the biggest failures of the series but more on that later.

Mr. Bennet, true to form, keeps to himself in his study, reading his books and shutting out his shrill and melodramatic wife.  Mrs. Bennet and her ever-present nerves spend an inordinate amount of time worrying about what will become of her and her daughters should her daughters not marry well.  Jane, the eldest Bennet daughter, is sweet and accommodating while Lizzy is more adventurous although we don't really get to know Lizzy very well since she is in Amanda's modern day London while Amanda is at Longbourne.  Mary is serious and studious, although a bit more lighthearted here than ever before.  Kitty and Lydia are silly and precocious.  All of that is well and good.

We, the viewers, expect that Amanda will find the reality quite different from the book.  And yes, we even expect for her to throw a wrench into Ms. Austen's beloved tale.  I did enjoy Amanda's confusion at what constituted a grand dinner at Netherfield as well as the primitive instruments used to brush teeth.  But overall I was disappointed and flat out angry with the character of Amanda.

She claims to have been a fan of Austen's and Pride and Prejudice from the age of thirteen and that she has longed for Mr. Darcy for thirteen years.  Given that, wouldn't you think that she would know how to conduct herself accordingly for the Regency times?  Yes, we can allow the initial culture shock and that she's not dreaming or on a reality show with hidden cameras.  Once she realizes that she is indeed within this story, wouldn't she realize that addressing persons by their Christian names is not allowed?  When she addresses Caroline Bingley by "Caroline", I cringe, or Charlotte Lucas upon first meeting as "Charlotte."  It simply was not done during that time and Amanda should have known that.  Additionally, allowing her hair to be down made me stabby.  There is no way any of the Bennet women, most especially Mrs. Bennet and Jane - - the model of propriety - - would have allowed Amanda to walk around with her hair loose.

As mentioned above, Amanda not only throws a wrench into the general plot of Pride and Prejudice, she turns it on its ear.  Parts are humorous and downright funny but others are painful.  I am not an Austen purist, I enjoy variations of all types, but certain liberties were taken with some of the characters that changed not only the overall story but the characters themselves.  In that regard, I suppose I am a purist and I thoroughly disliked what was done.

Amanda was a troublesome heroine for me.  On the one hand, I liked her.  I liked her at the start of the movie and felt for her when she merely wanted to read her book and her boyfriend had other ideas.  I liked and empathized with her confusion over finding Lizzy Bennet in her bathroom and then meeting all of these fictional characters come to life.  But she lost me when she became borderline unhinged and began acting out and doing things that simply were not done in Pride and Prejudice.   She did continue to try and correct where the plotline went off the rails but her corrections oftentimes led to further (and worse) disasters and that led me to a gradual dislike of her.

The actress playing Amanda did a fine job, as did the others.  The acting wasn't an issue, nor were the locations and sets.  I have read online distaste for Elliot Cowan as Mr. Darcy but I have to say that I found him rather amusing and fairly well cast.  He fit the shoe, so to speak, looks-wise and he certainly nailed Mr. Darcy's haughty command and personality.  Perhaps the haughtiness continued too long but that may have been more an issue with the script than with Mr. Cowan's portrayal. 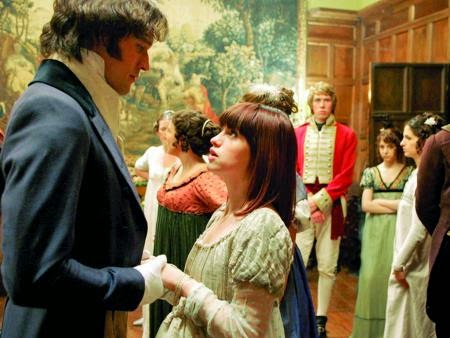 Speaking of Mr. Darcy, while I had no issues with how he was played, I did take serious issue with

The most egregious error on the part of Lost in Austen was that Lizzy - - Lizzy - - became a secondary and supporting character.  For me, Lizzy was the heart and soul behind Pride and Prejudice and for this production to relegate her to basic cameos is downright sinful.  I expect they hoped the viewers would attach themselves to Amanda and root for her but it simply did not happen here.

Lost in Austen is most definitely not for the Austen purist who will likely be horrified over what has been done to their beloved characters.  It is a somewhat entertaining romp through Regency England for a rainy afternoon and one not to be taken seriously.  I have seen it a few times and certain aspects do have charm upon repeated viewings.

FTC Disclosure: This movie is from my own personal collection and was purchased by me. I was neither paid nor compensated (ha ha) for this review.

As to Amanda knowing the mores of Lizzy's time, she is also supposed to represent a thoroughly modern woman.