THE SECRET OF PEMBROOKE PARK by Julie Klassen, Spotlight and Giveaway 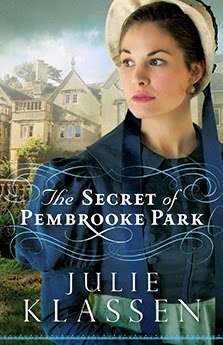 In the spring of 1818, twenty-four-year-old Abigail Foster fears she is destined to become a spinster. Her family’s finances are in ruins and the one young man she truly esteems has fallen for another woman — her younger, prettier sister Louisa.
Forced to retrench after the bank failure of Austen, Gray & Vincent, the Foster family optimistically pool their resources for another London Season for her sister in hopes of an advantageous alliance. While searching for more affordable lodgings, a surprising offer is presented: the use of a country manor house in Berkshire abandoned for eighteen years. The Fosters journey to the imposing Pembrooke Park and are startled to find it entombed as it was abruptly left, the tight-lipped locals offering only rumors of a secret room, hidden treasure and a murder in its mysterious past.


Eager to restore her family fortune, Abigail, with the help of the handsome local curate William Chapman and his sister Leah, begins her search into the heavily veiled past aided by unsigned journal pages from a previous resident and her own spirited determination. As old friends and new foes come calling at Pembrooke Park, secrets come to light. Will Abigail find the treasure and love she seeks...or very real danger?
Early Praise
“Jane Austen meets Victoria Holt in Christy Award–winning Klassen’s latest deliciously spooky and sweetly romantic historical.” — Booklist
“Regency romance with awesome castles, secrets, hidden rooms and, of course, romance . . . . Julie Klassen has hit this one out of the ballpark.” — Romantic Times Book Reviews Top Pick
“If you are looking for a book which combines the enticing elements of a Gothic with the mannerly charm of a Regency, look no further, because this lovely Inspirational is just your cup of tea.” — Heroes and Heartbreakers
“While there are plenty of Regency authors out there, the lovely Julie Klassen is by far one of the top and a must read for fans of Austen/Brontë style and prose. Klassen’s latest, The Secret of Pembrooke Park has a touch of both – the mystery of Brontë and the fun of Austen.”— Books and Beverages
“The Secret of Pembrooke Park is perfectly packaged with several threads of the gothic suspense, Regency romance and inspirational themes while presenting a well plotted story with intriguing characters in an amazing setting.” — Burton Book Review 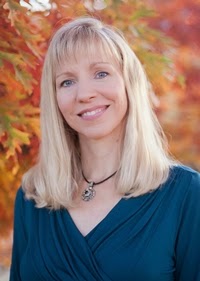 Email ThisBlogThis!Share to TwitterShare to FacebookShare to Pinterest
Labels: Julie Klassen, The Secret of Pembrooke Park

A wonderful book by my favorite author!!
Lindseypa89atyahoodotcom

Very excited to read this book

I loved this book. Julie is a great author!!!!!
kathrynlvoss(at)gmail(dot)com

Love the book! I enjoy how each one differs from the last. I am a part of The Regency Society of Virginia, so I absolutely adore these books!!

This look interesting - thanks for introducing me to a new author.
covenantmama(at)gmail(dot)com

These reviews just gave me even more reason to believe I won't be disappointed when I do manage to get a copy!

Julie Klassen is a new-to-me author. This blog hop and giveaway is a great introduction. I look forward to reading her stories.

I've never been to this blog before (I'm following Julie Klassen's blog tour) but I love the name and slogan!
kawaii ~dot~ katers at gmail.com

I'm checking out other reviews now!

I'm so excited for this book!! Can't wait to read another by one of my favorite authors!
mackenziecdufries@gmail.com

Thanks everyone. And thanks, Lori, for hosting me here today!

I'm so excited about the blog tour! Julie Klassen is one of my all-time favorites!

Looking forward to reading this book! Julie is on of my favorite authors!
rbgillihan(at)gmail(dot)com

This book sounds amazing!!!!!! Anything with a little bit of mystery and suspense makes me not able to put it down!!!

I couldn't put this book down!

Yet another review that is getting me antsy to read The Secret of Pembrooke Park.

Thanks for the giveaway. I loved the book and reviewed it on my blog ReadLove.

I am so looking forward to reading this book!! Julie is one of my favorite authors..:) - Juli
emeraldelena@hotmail.com

Thanks for the giveaway!!

Thank you for this wonderful opportunity!

I am a HUGE Julie Klassen fan so this giveaway would be wonderful to win!! She has instilled the love of everything Regency & the pursuit of other authors who write in this time period. I would love to see these on my bookshelf & pass them on to friends to enjoy. I am really enjoying this blog tour & really appreciate all the bloggers who are featuring Julie. I've read several of her books & always look forward to new ones :-) Thank you for a chance to win a great prize package!

Very excited to read the newest Julie Klassen book - love her others!

Such a great author! I hope to own all of her books. :)

This would make a great addition to our church library! librarybooks at religious dot com

This book has been on my "want to read" list since I first heard of it. I love Julie's books. The Secret of Pembrooke Park sounds like a book I'll really enjoy.

I really want to read this book!

Oh how I love all her books! Thanks for the chance!
Dezi A
sethdezAThotmailDOTcom

Oh, this book is so good! Thanks for reviewing it and being part of this blog tour.

I've read several of Julie Klassen's books and loved them, so I'm really excited about this one!

A great author. This is certainly a great book. sonja dot nishimoto at gmail dot com

Reading this book right now. After 6 chapters it sounds great, very mysterious and interesting. Read all previous books of Julie Klassen and love them all.

I love this book and highly recommend it!

sounds like a good book. great giveaway. love to win

Looking forward to reading Julie's latest book. Am enjoying visiting all of these sites.

I've always liked Jane Ausen and I have liked Klassen's work so far. The Tudor's Daughter is my favorite!

I would love to read this book!

Thanks for being part of the book tour. Julie's books are always wonderful.

Awesome book! Julie is now one of my favorite authors!

I love Julie's works. I am so looking forward to reading this novel.

What in the world! Somehow I missed this on the first go around.

I love Julie's books and really want to read this latest one too :)

I just read the wonderful interview you posted with Julie Klassen. I've read a couple of her books and am determined to read every one of them!

Julie Klassen does such a wonderful job on her stories! I would love to read more of her books!

I've read all her books and loved them! Can't wait to read this one!
Dezi A
sethdezAThotmailDOTcom

Looks like a great read. I'm always happy to learn about a "new" author.

Julie is so incredibly talented - I hope a ton of people get to read this!

Always a fan of Julie's books - can't wait to read it! truckredford(at)gmail(dot)com

I'm loving the characters in the sneak peak posted. Cant wait to read your book.

I love Julie and historical fiction. They make me giddy!

I'm looking forward to reading this!

Anything by Julie gets my full attention - with her attention to research and unique plots, I'm a happy reader!