Guest Post: "Locks on the Seine: Love or Litter" by Michael Saint James 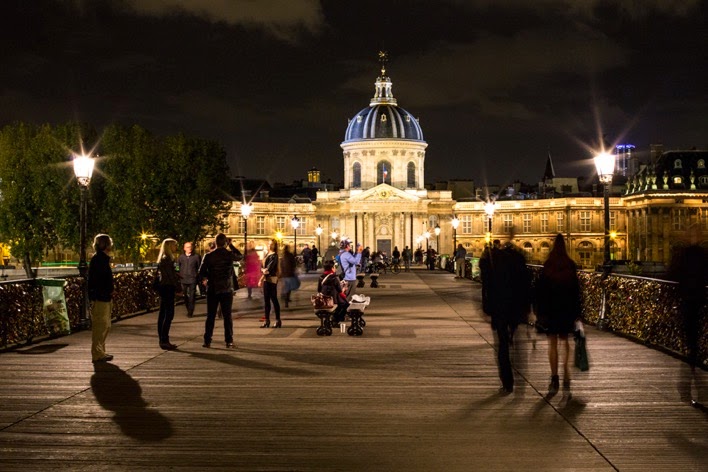 Locks on the Seine: Love or Litter?Unlocking Love in the City of Love
In the City of Love, two sweethearts stand on a bridge over the Seine River. They write their names on a padlock. They hook it to the bridge’s railing, and secure the lock—and they hope their love—forever. They toss the key in the river together. 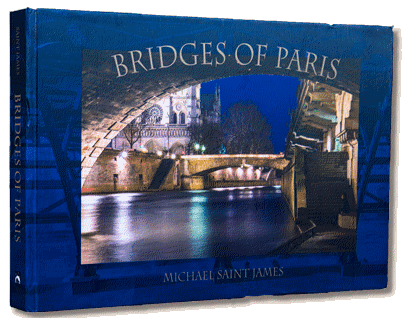 While spending months photographing the bridges on the Seine for my new book, Bridges of Paris, I frequently witnessed this ritual with everything from beautiful engraved locks to bike locks to handcuffs, and was still helplessly charmed every time. After the key is tossed, most lovers kiss passionately at what has now become their favorite spot in the city. They wander off to celebrate that their love and the lock will surely persist for all time — or at least until the fence, under the weight of thousand of locks, rips free of the bridge’s parapet and tumbles into the Seine.
“I heard one of Paris’s bridges collapsed!” a friend emailed me from the States in June 2014. When I arrived on the bridge, the Pont des Arts, I found only one small section of the chain-link railing, filled with locks, hanging over the Seine. It hung there until city workers removed it and covered the gap with plywood. The bridge’s integrity was never in question.
The Pont des Arts was the city’s first love-lock bridge, then Pont de l’Archevêché by Notre Dame. Both bridges were targeted because of their chain-link railings. Once they were full, the phenomenon spread to other bridges 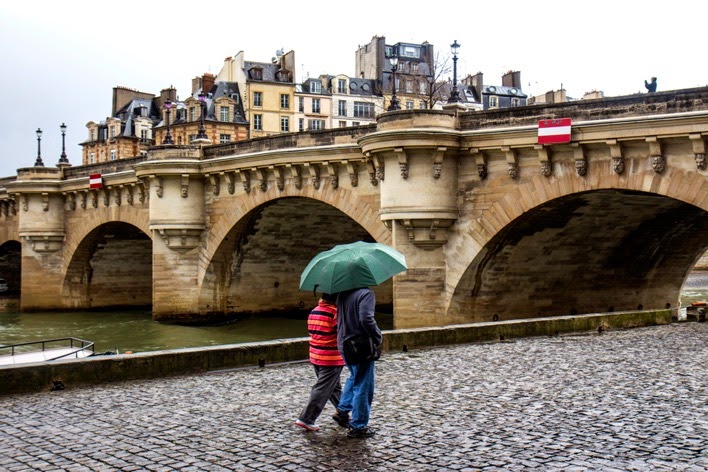 One catalyst for this ritual was Italian author Federico Moccia’s 2006 teen novel, Tengo ganas de ti (I Want You). Two young Roman lovers declare their bond by securing a lock inscribed with their names to the Ponte Milvio, then threw the key into the Tiber River.
Locks have sprouted on bridges all over the world, including Brooklyn, London, Budapest, Serbia, Prague, Moscow, South Korea and China.
Treasure or trash? In Paris, the locks are now considered visual pollution. The locks damage the bridges and keys litter the riverbed. When the Pont des Arts’ railing tore, Parisians lost their tolerance. Paris has now launched a no-love-lock media campaign. Bridge wire railings are being replaced with clear acrylic panels. Though some still bring locks, the tide is turning.
The love-lock fad will fade away and the beautiful crossings over the Seine will regain their architectural beauty. Lovers will always meet on Parisian bridges, gaze into each other’s eyes and make commitments beyond their understanding.
When the time comes, I’ll go back to take photographs for the second edition of my book: Bridges of Paris Sans Serrures (“Without Locks”).

About the Author
Michael Saint James’ artistic pursuits include award-winning book design, film editing, and sound recording, as well as his first love, photography. Saint James is a world traveler, having visited more than 50 countries - doing everything from photographing penguins in Antarctica to trekking the Himalayas.

As an educator with California teaching credentials, he has taught media production and technology arts as well as photography, art history and visual storytelling. He is an expert speaker on Impressionist and Post-Impressionist art. Indeed, he walked in Vincent Van Gogh’s footsteps through the Netherlands, Belgium, and France in order to immerse himself in that troubled master’s vision.

The father of two grown children, Saint James once owned a café in Berkeley, California. He has bicycled from Las Vegas to Washington, D.C. and is rumored to play a mean blues harmonica.