Audiobook Review: SPELLING IT LIKE IT IS by Tori Spelling 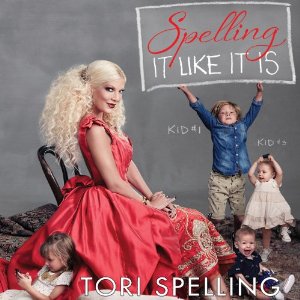 Description:  The reality behind reality TV! Hollywood's favorite mom-star tells it like it is.

Tori Spelling is the first to admit that the "reality" behind her popular television show, Tori & Dean, isn't always real. Not even Star magazine could invent the true chaos that happens behind the scenes. Luckily, Tori is famously honest and self-deprecatingly funny when it comes to her personal life - she's always "Spelling it like it is". Life is never boring at Tori's house, but since the release of her New York Times best-selling memoirs sTORI Telling, Mommywood, and Uncharted terriTORI, things have been especially unpredictable:

And then there was allowing cameras to film every personal detail of her life - from the most challenging time in her marriage to the only time in six years when she really felt as though those cameras invaded her privacy. Tori shares these stories and many more with the usual humor, candor, and down-to-earth charm that her fans love. She also writes openly about her biggest challenges: terrifying health problems; her guilt over missing baby Hattie's early months because she was in the hospital on bed rest; her struggles (and failures) to live within her means after growing up in opulence; the discovery that she has a lot in common with her late mega-producer father, Aaron Spelling; and how she fell in love with Dean all over again. (Hint: it didn't happen at their vow-renewal ceremony.)

After years of revealing her everyday antics on-screen, Tori's life is still full of surprises. Slowing down long enough to enjoy them? Now that's another sTORI.


My Thoughts on Spelling It Like It Is by Tori Spelling

I'm just going to throw this out there and you can then decide whether to proceed.  I'm a fan of Tori Spelling's (there, I said it.)  I watched the entire run of Beverly Hills 90210 (don't judge) even though I was not their target audience (being several years out of high school when it started) and I've watched every one of her reality series.  If you haven't had the pleasure of watching her first, So NoTORIous, you really should find it pronto because it's hilarious.  Anyone who can poke fun at themselves and poke fun at Scientology is a friend of mine.  And yes, that was me last year at Book Soup in Hollywood at her brother Randy's book signing (where Tori made an appearance.)  So you've been warned.

That said, I picked up this audiobook for two reasons - - because I felt I needed something light to laugh at or with and it was on sale.  Say what you will about Tori Spelling but she is always good to laugh with.

I read her first book sTORI Telling and enjoyed it.  Was she 100% honest?  No idea but I'd be willing to bet there was more truth and bang for your buck than anything with "Kardashian" attached to it.  I expected to enjoy Spelling It Like It Is and I was not let down.

Don't go into this book (or any other by Ms. Spelling) expecting to have your world blown.  A literary classic it is not.  But if you're looking for a beach read, and if you're in the market for an audiobook read by the author and read reasonably well, you can't go wrong here.

Tori shares why her family has moved so much in the last few years and how much they have lost financially in their real estate dealings (ouch.)  She writes about her back-to-back pregnancies and the medical problems she faced with Finn, her youngest child (sometimes to oversharing detail.)  I did sympathize with her for missing so much of her daughter Hattie's first year, being on bed rest and then hospitalized.  She speaks of her illnesses, her issues with migraines and her multitude of hospital visits.  (She really should have some level of ownership or stock at Cedars Sinai.)

For you gossip mongers and tabloid readers, she talks of her marriage although if you are looking for serious "they are divorcing any moment!" dirt, you're out of luck. She does mention her run-ins with the paps and it's clear that there are certain paps that Tori has good enough relationships with that they give her children space.  The one that did not - - well, that guy deserved the Mom Mafia that got on his ass.  You may think that Tori Spelling has it on easy street (and maybe she does at times) but I would hate to have cameras following me around everywhere I go, even to the point of where she has to send in a decoy (okay, a friend) to buy a pregnancy test for her so it doesn't end up on the cover of a tabloid.  I mean, just UGH.

Tori doesn't sugar coat things and it's a welcome change from the "pretty pretty princess" drivel we get from other arenas.  Be warned too though Tori enjoys talking about her family's apparent obsession with poop.  Yes, that's right - - poop.  If you ever find Tori's phone anywhere, I beg of you not to look through her photos because you are certain to be assaulted with various images of her children's poop.  (There is definitely a joke waiting to be made here but I'm just going to leave it alone.)

One thing I have always admired about Tori and will reiterate here is that girlfriend hustles.  She's not content to sit on the sidelines and always seems to have many, many pokers in the fire.  She has written in the past of getting this drive from her father and I think he would be proud to know that she is a mover and a shaker.

If you're not a fan of Tori Spelling you're not going to be a fan of this book (and I have to assume that you're reading this review because you're a fan of mine or my mom.)  If you find Tori humorous and entertaining, chances are you'll have the same opinion of this book.

Spelling It Like It Is is available at major booksellers, as well as through Audible.

Grab this book on Audible


*  On a side note and totally unrelated to this book, let me give props to Randy Spelling, who has truly moved away from the Hollywood scene/entertainment biz smoothly.  He now works as a life coach in Portland and hearing him speak and meeting him in person, I can understand how he succeeds on that path.  He's a gifted speaker, very down to earth and easy to relate to as well as being extremely friendly.  He chatted very easily with those of us that showed up for the talk/signing and cheerfully signed books and posed for pictures. And yes, he is very attractive in person.


FTC Disclosure:  This audiobook is from my own personal collection and was purchased by me.  I was neither paid nor compensated for this review.  I am not too proud to take a donation though.  (Just a little touch of humor.)
Posted by Lori Johnston at Thursday, May 19, 2016

Email ThisBlogThis!Share to TwitterShare to FacebookShare to Pinterest
Labels: Randy Spelling, Spelling It Like It Is, Tori Spelling