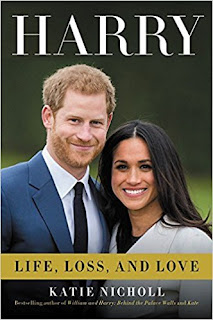 With royal wedding hysteria still at a fever pitch, this seemed the perfect time to read a tome about Henry Charles Albert David of Wales.  I had first heard of Katie Nicholl's biography on Prince Harry back in November, at the time his engagement to Meghan Markle was announced.  Ms. Nicholl, considered an authority on royal affairs, was interviewed about the milestone engagement and this book was mentioned.
I have long been fascinated with the British royal family, starting, I suspect, with Lady Diana Spencer's engagement to Prince Charles.  That event was the fodder of young girls' dreams of princesses and perfect love - - something we would eventually learn was not the case with the Prince and Princess of Wales.  The older and more serious Prince was mismatched from the beginning with the young and self-professed "naughty" Diana.
Harry, their second son and the "spare" to the English throne, has always been a subject of fascination for the media.  As the "spare" and never seriously considered to be in line for the throne (especially now that William and Kate have three children) Harry has been given more leeway and breathing room and, as such, has gotten into more trouble than William ever considered.
Only twelve at the time of his mother's untimely death, Ms. Nicholl explores that Harry has been hungry for maternal love and a family of his own.  His youth is briefly touched upon, with the majority of the book dealing with his adolescence and adulthood.   Ms. Nicholl does not shy away from Harry's poor deeds and missteps (dressing in a Nazi uniform, anyone?) or bad habits, such as indulging in drinking and smoking. To Meghan Markle's credit, it appears that the prince has either altered or given up these habits entirely.
Harry's romantic life is covered in great detail; most important is the fierce media coverage and speculation being a matter of extreme frustration and unhappiness for him.  His two  most serious relationships prior to Ms. Markle, that of Chelsea Davy and Cressida Bona, were both broken down by not only the ceaseless media coverage but also the lifestyle that must accompany being with a senior member of the Royal Family.  In these tales, Harry is seen as less of a playboy and more of a man who is both enabled and hindered by his position in life.
His meeting of Ms. Markle, as well as their long-distance relationship, is recounted in good detail here. Ms. Nicholl states that Harry apparently knew that Meghan was "the one" from their first meeting and the two do appear to have much in common, especially their dedication to humanitarian efforts.
It was heartwarming to read of Harry coming of age in his late twenties/early thirties and realizing he wanted to follow the path of his esteemed mother.  Recounting interviews that he and William gave in which they spoke of Diana give great insight into both young men, who have turned out surprisingly down to earth and humble.  Harry speaks of the pain of losing his mother at a young age and how he was not allowed or able to fully express that grief, even to this day.   He also speaks of wanting to do his mother's memory justice by his actions.  Rest assured, Harry.  You are.
I found Harry: Life, Loss, and Love a well-researched, written and interesting read.  There were a few dry parts but overall, I think Ms. Nicholl presented a well-rounded view of Prince Harry, as well as some insight into Meghan Markle.  With the recent rash of Harry and Meghan books flooding the market, Ms. Nicholl's biography is a solid source of information.  Pick it up to get your post-wedding fix, or to learn a little more about Prince Harry.
Connect with author Katie Nicholl on her website (Katienicholl.com) or via Twitter (@katienicholl).
FTC Disclosure:  I obtained this book at my local public library.  I was neither paid nor compensated for this review.