HUNTING CHARLES MANSON: THE QUEST FOR JUSTICE IN THE DAYS OF HELTER SKELTER by Lis Wiehl and Caitlin Rother 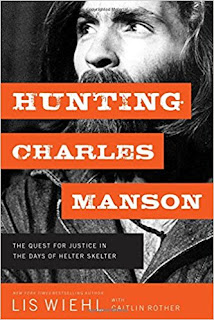 Hunting Charles Manson is a notable and strong entry of the books on the infamous summer of 1969.  It doesn't cover as much ground as Helter Skelter, which gives us a lot of information on the criminal trial, but it also doesn't have its intimidating (for some) page count.

Hunting Charles Manson starts with background information on Manson himself, giving the reader an exploration of his home life, mindset and how he started down the road that would lead him to the Haight-Ashbury and the birth of "The Family."  I found the sections of the inception of The Family particularly interesting; the result is beneficial insight into why he managed to attract so many females to his coterie who remained loyal to him for years.

Many of his Family members are also given page time.  Rather than being portrayed as merely Manson's bloodthirsty minions, the authors demonstrate they were real people with real lives before becoming part of Manson's contingent.  It will make you think about what might have happened had they never met up with him; was the Family was little more than a drug-addled cult?  The authors' descriptions of daily life on Spahn Ranch are extremely well done.  I could visualize the hot dust blowing on the old movie sets and Family members grouped around, listening to Manson playing guitar.  It brings on a wistfulness -- even sadness -- that this communal living, instead of bringing love and peace, spawned violence and death.

The murders themselves are each recounted.  The details, if you are sensitive, can be agonizing to read and envision.  Gary Hinman, Steven Parent, and Donald "Shorty" Shea are often given the short-shrift of the verified Manson victims; Parent is the forgotten victim of the Tate-LaBianca crimes while Hinman and Shea are very nearly forgotten as victims at all.  More details are provided on Hinman and Shea as people versus just murder victims; it makes their loss, and the violent actions of Manson and the Family, all the more poignant and effective.  Thanks to this book being recent and published after Shea's body was discovered, a long-held legend within the Family that Shea had been "chopped up" into pieces and scattered in multiple graves can be discounted as well as providing a solid account as to Shea's final movements and day of life and who was involved in killing him.

The convicted killers' convoluted and tangled web through the legal system is also explored and this is one of two points in the book that I didn't agree with.  Sections on Charles "Tex" Watson, the man involved in every murder save Gary Hinman and the self-professed "right hand man" of Charles Manson, read almost sympathetically.  Even if you do believe that Watson is paying his debt to society and has become a born-again Christian, I cannot forget that he brutally stabbed to death Sharon Tate, who begged for the life of her unborn child, and then went on to marry and father four children while incarcerated.  I find that particular irony distasteful and revolting.  While Watson may have taken so many illegal drugs as to hinder his thinking, it didn't affect his ability to torture and kill and I simply cannot grant any sympathy to him; only to his victims.

The other point in the book that I didn't agree with - - and this is more my opinion than anything else -- is a motive for the Tate murders put forward in Hunting Charles Manson.  I've heard of the motive previously and this book does an excellent job in breaking it down and presenting it.  The problem I have with it is that it doesn't explain how and why Steven Parent became a victim, if you believe that Parent was the first person on Cielo Drive to die that night.  (And there has never been evidence to suggest otherwise.)  But again, that's simply my opinion and motive is something we may likely never get a firm answer on, especially now that Manson is dead.

Hunting Charles Manson does something that many books in the Manson library have not been able to do and that's provide a fresh look on crimes that have been written about, debated and dissected for nearly fifty years.    I appreciated the view inside Manson's life for the last ten or so years of it -- something rarely written about.  I also like that Ms. Wiehl and Ms. Rother showed the determination and strength of Debra Tate, Anthony DiMaria and Kay Martley as they attend and have attended parole hearings for years, speaking not so much of the ugliness their loved one experienced at the hand of Manson, et al. but of the precious memories they have of the precious people that were.

Hunting Charles Manson is an excellent resource for exploring the psyche of Manson in our quest to answer why.  Why did he turn out the way he did?  Why did he want strangers butchered?  Why does he continue to fascinate today?

I have been a fan of Caitlin Rother's books for years and made it a point to get this book solely based on her as an author.  As with her previous books, Ms. Rother presents the story and attempts to get into the mind of madness and answer the questions that puzzle those of us who have been fortunate enough to remain distant from the crime.  She is always respectful of the victims and their survivors, not glorifying the violence or the offender, and that is one reason I am a fan.  She's also a darn good writer.  For more information on Caitlin Rother and her books, go here.

I wouldn't hesitate to recommend Hunting Charles Manson for true crime buffs or readers looking for information on Manson and his crimes.  The fact the book features information from as recent as early 2018 is a bonus.

Hunting Charles Manson is available for purchase at major booksellers as well as Audible if you prefer audiobooks.

FTC Disclosure:  The review copy of this book was provided to me by NetGalley in exchange for a fair and honest review.  The provision of this book did not affect the outcome of my review.  I was neither paid nor compensated for this review.