It seemed a harmless invitation, after all . . .
When Mrs. Darcy invited her sister Lydia's daughters to come for a visit, she felt it was a small kindness she could do for her poor nieces.  Little did she imagine the upheaval that would ensure.  But with her elder son, the Darcys' heir, in danger of losing his heart, a theatrical scandal threatening to engulf them all, and daughter Jane on the verge of her come-out, the Mistress of Pemberley must make some difficult decisions . . .
-- From the back cover of Mrs. Darcy's Dilemma

I'm ashamed to admit that I've had this book, purchased at a Jane Austen talk in L.A. directly from the author herself, in my personal library, unread, for a good three or four years.  Shame on me.  This is what happens when you have a healthy library and a lot of things going on.

Nonetheless, Mrs. Darcy's Dilemma is one of the founding fathers, if you will, of the Jane Austen Fan Fiction and the Pride and Prejudice variations, having been written back in the 90s and published in 2008.  For that reason alone, it's worth picking up.

So let's get into it!

If you are well versed in the JAFF community, you know many of the variations and/or sequels take place immediately following the events in Pride and Prejudice; i.e., the momentous weddings of Jane Bennet to Charles Bingley and Elizabeth Bennet to Fitzwilliam Darcy.  Not so with Mrs. Darcy's Dilemma.  Instead, Diana Birchall cleverly picks up the story twenty-five years after the conclusion of P&P.  This allows the reader to be introduced to a new generation of Darcys, Bingleys, Collinses and Wickhams and puts them smack into the start of Queen Victoria's reign.

I'll admit that I love picking up the P&P story immediately following the weddings, as Jane Austen herself never wrote a sequel and gave us any further glimpses into the lives of the Bingleys, Darcys and Bennets.  That said, and despite my initial hesitation over the timeframe put to use here, I thoroughly enjoyed being taken to the 1830s.  It was gratifying to see Elizabeth and Darcy's children and, most especially, their continuing love for one another on relatively smooth roads.  At least until our book!  Lizzy, of course, has proven to be a most-effective and well-suited mistress of Pemberley;  graceful, caring, and giving Mr. Darcy two sons (the heir and the spare) and a lovely daughter -- most likely to the frustration of Lady Catherine de Bourgh!

While it's a wonderful and unique glance at the Darcys' lives to focus mostly on the Darcy children, it does mean that Lizzy and Mr. Darcy are not the primary characters.  For some, that may prove to be a hurdle . . . and I'll admit that I did miss the two being the romantic center of the story.

Lydia Bennet Wickham's daughters, too, are major players in this tale.  As you can imagine, one daughter very much takes after her mother!  Like the two Darcy sons, I found one Wickham daughter quite agreeable while the other distasteful.  You might expect that with George and Lydia Wickham as parents but Fitzwilliam and Elizabeth Darcy?

Readers will also get to revisit with Georgiana Darcy, Colonel Fitzwilliam and Caroline Bingley who, I'm gratified to report, has not altered much these twenty-five years.

I was slightly disappointed that Jane and Charles Bingley did not get more time, in the same way that Kitty Bennet, in twenty-five years' time, became more bitter and solitary than one would expect after Lydia's departure in P&P.

That said, Mrs. Darcy's Dilemma was a delightful read.  I zipped through it, hating to put the book down so anxious was I to find out what would befall my favorite characters.  Ms. Birchall's writing was engaging and highly reminiscent of Queen Jane herself.  I'd recommend picking it up and reading it yourself if you'd like to revisit the Darcys!

FTC Disclosure:  I purchased this book with my own funds.  I was neither paid nor compensated in any fashion for this review. 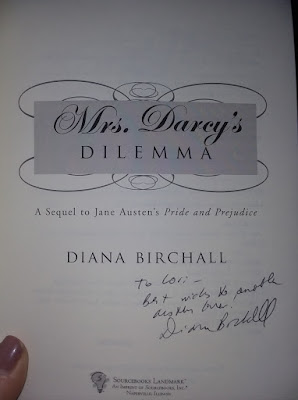