BENEATH THE ATTIC by V. C. Andrews 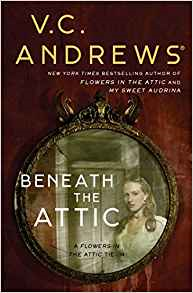 Synposis:  Forbidden passions have shaped and haunted the Dollanganger family since their first novel -- Flowers in the Attic --  debuted forty years ago.  Now discover how twisted the family roots truly are, and witness the clan's origins as a result of one wild and complicated relationship.  In this evocative and thrilling tale from New York Times bestselling author V.C. Andrews, see Corrine Dixon as a young girl and discover the fascinating family history of the Dollanganger clan.

Two generations before Corinne Foxworth locked her children in an attic, her grandmother, a gorgeous young girl named Corrine Dixon, is swept away by the charms of rich, sophisticated, and handsome Garland Foxworth. After discovering that she’s pregnant, Garland does what appears to be the honorable thing and marries her in a huge ceremony on the luxurious Foxworth Hall grounds. Both families fervently overlook the pregnancy, happy for a suitable resolution.
Now the mistress of a labyrinthine estate, Corrine discovers that nothing is what is seems. Garland is not the man once captivated by her charms, and she’s increasingly troubled by his infatuation with memories of his departed mother. Can Corrine survive this strange new life? Or is her fate already sealed? Explore the origins of the legendary Dollanganger family in this page-turning, gripping gothic thriller.

Be forewarned:  Spoilers ahead!

V. C. Andrews was the first author I became obsessed with (understandable, right?  I was 12 or 13 and every girl in my school was toting around Flowers in the Attic).  Even today, the story still sticks with me.  After Ms. Andrews' early death in 1986, I continued to read some of the Andrews books by the ghostwriter until I found other authors to follow.

When I heard about Beneath the Attic, I knew I had to give it a shot because Ms. Andrews never revealed much about the Dollanganger children's paternal great-grandmother, the infamous Corrine, other than Garland Foxworth was desperately in love with her and she ran off with someone else, leaving him and their son Malcom bereft.  So even though the beloved V.C. didn't pen this, I was still interested in reading some Dollanganger back story.

This is where it gets painful.  Firstly, I thoroughly disliked Corrine for much of the book.  I get that she's supposed to be a tween and then teen but she was disgustingly annoying.  Somewhat similar to her future granddaughter (and namesake) Corrine and her great-granddaughter, Cathy (she of Flowers in the Attic), she is blessed with gorgeous blonde hair and oh-so-blue eyes.  She's beautiful and she knows it, y'all.   And like her granddaughter and great-granddaughter, that beauty is clearly going to cause her nothing but problems.

Speaking of, those problems were . . . well, boring.  Original recipe Corrine comes from a well-to-do family; she's an only child with a father who adores her and a mother that either attempts to helicopter-parent her before it's trendy (the book mostly allegedly takes place circa 1890) and/or is envious of her daughter.  The friends she has seem to be of a purely shallow, superficial type -- and they were quickly dropped and forgotten once Corrine meets Garland Foxworth.  In fact, the friendships appear to be social occasions in which Corrine can stress to the other girls how pretty she is, make herself feel good about it, and tell tall tales about how much she knows about boys and sex (hint: very little.)

Again, that it until she meets Garland Foxworth.  This may be my biggest problem with Beneath the Attic.  In all previous Dollanganger sagas, Garland was portrayed as a good, decent man who was deeply in love with his first wife and devastated by her betrayal.  I guess no Andrews book, whether by V.C. or the ghostwriter, is complete with at least one rape scene, regardless of the parties involved.  Garland is utterly unrecognizable in this incarnation, between taking advantage of the flighty and somewhat stupid Corrine and then his 1890s version of ghosting, which only seems to change due to Corrine's father's interference.  And would Mr. Dixon be so calm over Corrine's situation?  I'm thinking not.  It was 1890, not 1990.

Regardless, I kept turning the pages, hoping not only for the story to pick up and get interesting but also hoping for some insight into characters the public was first introduced to in 1979.  If you're looking for that, as I was, sorry, folks.  You will be disappointed.

Not only does Beneath the Attic not give any real insight into either Corrine or Garland but the "story" ends before Corrine and Garland even marry - - despite the book synopsis mentioning that Corrine is now the mistress of an estate.  She is not.  Sure, we know they marry but the ending felt rushed and it was totally set up for another book or books.

I hate to say this but Beneath the Attic comes off like a cash grab, hoping to entice fans of Flowers, the Dollangangers, and V.C. Andrews.  The Andrews name does still guarantee book sales, and the Dollanganger connection certainly doesn't hurt but the story is so flimsy, I can't recommend this book.  It's a shame too because the original Corrine's story could have been a fascinating one, had the character been given any depth.

Beneath the Attic is available for purchase at major booksellers, in physical and e-book format, and as an audio book through Audible.

FTC Disclosure:  The review copy of this book was provided to me by NetGalley in exchange for a fair and honest review.  The provision of this book did not affect the outcome of my review.  I was neither paid nor compensated for this review.

Email ThisBlogThis!Share to TwitterShare to FacebookShare to Pinterest
Labels: Beneath the Attic, Dollanganger series, Flowers in the Attic, V.C. Andrews