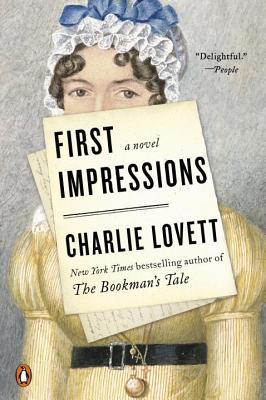 A thrilling literary mystery costarring Jane Austen from the New York Times–bestselling author of The Bookman’s Tale. Charlie Lovett’s new book, The Lost Book of the Grail, is now available.
Book lover and Austen enthusiast Sophie Collingwood has recently taken a job at an antiquarian bookshop in London when two different customers request a copy of the same obscure book: the second edition of A Little Book of Allegories by Richard Mansfield. Their queries draw Sophie into a mystery that will cast doubt on the true authorship of Pride and Prejudice—and ultimately threaten Sophie’s life.
In a dual narrative that alternates between Sophie’s quest to uncover the truth—while choosing between two suitors—and a young Jane Austen’s touching friendship with the aging cleric Richard Mansfield, Lovett weaves a romantic, suspenseful, and utterly compelling novel about love in all its forms and the joys of a life lived in books.

So this is a little bit of a cheat since I listened to the audio version of this book several years ago.  However, with the pandemic lockdown in place and since I purchased the physical version of the book for a song last year, and being in the mood for some Jane Austen-themed/inspired work, I picked it up.

Mr. Lovett's First Impressions: A Novel is an absolute delight, mired in mystery and romance and taking place in both present day England and Regency England.  Honestly, you can't go wrong there; right?  I found the concept of the possibility that Jane Austen didn't actually author Pride and Prejudice fascinating (and a bit terrifying, let's be honest) and I was immediately drawn in to the search for an elusive first draft of Pride and Prejudice.

The plotline alone of First Impressions makes this book unputdownable; Mr. Lovett's thoroughly fleshed out characters, both real (Jane Austen and her family) and fictional (Sophie and her family, her boss, the two  men charming her and Richard Mansfield), move this book from the good shelf to the excellent shelf.  It always helps to relate to and/or thoroughly like your heroine;  the author succeeded in this with Sophie Collingwood.  She was smart, adventurous and a Jane Austen loving bibliophile.  I really loved her, as well as her Uncle Bertram, who was introduced and explained to us in flashbacks and memories.  I could easily see his London flat, with books stacked everywhere, and wished I could move in.  Similarly, I could also visualize the book shops and stalls in Cecil Court, most particularly Boxhill's, and the English countryside where the fictional Richard Mansfield communed with Jane Austen.  First Impressions really makes me yearn to go back to London (and I was just there last month!) and the English countryside.

Speaking of the English countryside, I absolutely adored the relationship between Jane Austen and Richard Mansfield.  Their interactions, their conversations and mutual respect felt so genuine that it was difficult to remember that Mr. Mansfield was a fictional creation from Mr. Lovett.  Jane and Richard didn't share a romantic love but a very deep love nonetheless and it was beautiful to read and experience.

I devoured First Impressions, savoring every moment I spent with Sophie, Jane, and Richard,  and was left wanting more.  The ending was as it should be, and very satisfying, but I was aggrieved that it meant the end of this exciting, adventurous and ultimately lovely tale.      I would not hesitate to recommend First Impressions to any reader who is partial to Jane Austen, alternate timelines and/or intrigue (historical and present-day).  First Impressions is a love letter not only to Jane Austen but to books; a book for book lovers.

First Impressions is available for purchase at major booksellers, including Amazon.

FTC Disclosure:  This book came from my own personal library.  I was neither paid nor compensated for this review.