INSIDE OUT: A MEMOIR by Demi Moore 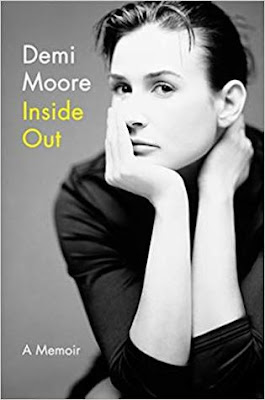 Famed American actress Demi Moore at last tells her own story in a surprisingly intimate and emotionally charged memoir.
For decades, Demi Moore has been synonymous with celebrity. From iconic film roles to high-profile relationships, Moore has never been far from the spotlight - or the headlines.
Even as Demi was becoming the highest paid actress in Hollywood, however, she was always outrunning her past, just one step ahead of the doubts and insecurities that defined her childhood. Throughout her rise to fame and during some of the most pivotal moments of her life, Demi battled addiction, body image issues, and childhood trauma that would follow her for years - all while juggling a skyrocketing career and at times negative public perception. As her success grew, Demi found herself questioning if she belonged in Hollywood, if she was a good mother, a good actress - and, always, if she was simply good enough.
As much as her story is about adversity, it is also about tremendous resilience. In this deeply candid and reflective memoir, Demi pulls back the curtain and opens up about her career and personal life - laying bare her tumultuous relationship with her mother, her marriages, her struggles balancing stardom with raising a family, and her journey toward openheartedness. Inside Out is a story of survival, success, and surrender - a wrenchingly honest portrayal of one woman's at once ordinary and iconic life.
(Summary from Amazon.)
Full disclosure: I was never pro or con Demi Moore before picking up this book so I don't feel I was biased in any fashion while reading.
That said, I knew that Demi Moore has so far had an interesting life and an impressive career, as well as having been married to one of Hollywood's most successful action heroes (Bruce Willis.) What I didn't realize was how truly shocking a life Ms. Moore has had.
To say she had a rough start is an understatement, between her teenaged parents who had a love-hate relationship filled with verbal, alcohol and drug abuse to health problems that resulted in multiple hospital stays before she hit adolescence and repeated family relocations to stay one step ahead of creditors, extramarital affairs and even the Mafia. By the time she was a teen, Ms. Moore's parents had divorced (although keeping in dysfunctional contact), she had learned shocking information about her birth, been the victim of assault and had little to no parental supervision, as her mother treated her like a sister rather than a daughter, even going so far as to take her teenaged daughter to bars with her in order to assist in picking up men.
All the more amazing that Ms. Moore not only survived and got out of that life but entered the acting profession successfully. A stint on the then-highly popular General Hospital led to movie roles which led to her breakout role in St. Elmo's Fire, a film that Ms. Moore recounts she is grateful for in not only her career trajectory but in saving her life.
I found myself drawn into Inside Out, so much so that I read the book in a single sitting. I alternated between feelings of shock, awe, sadness, amazement, and sympathy for Ms. Moore. So easily this story could have ended differently but thanks to her friends, her children, and her resilience, Demi Moore has survived. Rather than solely a cautionary tale, Inside Out is a book of inspiration and healing.
Inside Out is a relatively short book at 272 pages and it's written with raw candor. Candor about Ms. Moore's drug and alcohol abuse, her relationships, her marriages and the eventual dissolution of them. While her films are discussed, the memoir has more to do with Ms. Moore's self-proclaimed survival, success, and surrender than just a Hollywood star recounting her successes and failures. Well done, Ms. Moore.
Inside Out is currently available in Kindle, hardcover, paperback, and audio format through Amazon and other sellers.

FTC Disclosure: I obtained this book at my local public library. I was neither paid nor compensated for this review.