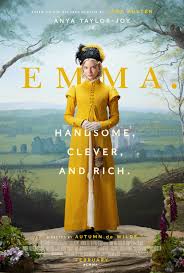 Emma Woodhouse, handsome, clever, and rich . . . had lived nearly twenty-one years in the world with very little to distress or vex her.


So begins not only Jane Austen's fourth novel but also the latest big screen adaptation of an Austen work.  As does all of Ms. Austen's novels, Emma is all about relationships between men and women, the restrictions women in the 19th century faced and the sometimes tough choices, and simmering barely below the surface sexual tension.

Emma is often named by many fans (and those bizarre detractors) as their least favorite Austen heroine.  The author herself famously said that the title character is a heroine whom no one but myself will much like.  The Emma of this movie lends credence to that statement as she is spoiled, self-centered and vapid with little more in her head than ribbons and lace and what she considers her superior matchmaking skills (as she has lent a hand in securing the widowed Mr. Weston in marriage to her governess, Miss Taylor.)  In fact, it's clear that Emma Woodhouse not only has little to vex or distress her but little to stimulate her.  Other than matchmaking and purchasing items from the local haberdashery, it seems her sole purpose in life is listening to her father list various ailments and worries, as there always seems to be an errant breeze rushing through their home of Hartfield, threatening to cause him or Emma to fall ill.
Anya Taylor-Joy does a remarkable job as Emma, from her mannerisms to a simple look in which she conveys Emma's frustration, disgust or dislike.  When she's onscreen, you simply cannot look away.  Unfortunately, however, I disliked Emma immensely throughout the majority of the film and found her difficult to root for.   Her strong conviction in her superiority among her acquaintances and Highgrove in general reaches an ugly climax in a well-known scene at Box Hill, where she insults and humiliates the harmless, if chatty, Miss Bates in front of a group.
Equally selfish is Emma's desire to take on Harriet Smith, a young lady lately of Mrs. Goddard's School and one with unknown parents (a social kiss of death in Regency England) as her protégé and project.   Harriet is a sweet girl who believes that Emma is indeed superior to her in all things and follows Emma's lead in love and relationships, much to her own detriment.

As Emma's moral compass and with the job to provide us with plenty of smoldering looks (as well as a brief flash of backside) is Mr. Knightley, gentleman owner of Donwell Abbey, whose own brother is married to Emma's sister (who unfortunately inherited Mr. Woodhouse's hypochondriac tendencies.)   Mr. Knightley is a more vivacious Mr. Bingley or a less proud/prejudiced Mr. Darcy; he often spends evenings with Emma and Mr. Woodhouse, walking from Donwell Abbey rather than use his carriage (something I know that Elizabeth Bennet would approve of.)  He's such a kind, decent landlord and man that you have to wonder what on earth he would ever see in the spoiled and insufferable (at least for most of the film) Emma.
The casting in the movie is well done.  Besides the aforementioned Anya Taylor-Joy,  Johnny Flynn as Knightley, Mia Goth as Harriet and Bill Nighy as Mr. Woodhouse are perfectly suited for their roles.  (Who knew I would accept a blonde Knightley?)   Callum Turner is just right as the foppish Frank Churchill and Josh O'Connor and Tanya Roberts are appropriately smug as the insufferable Mr. and Mrs. Elton.

Perhaps the best thing about Emma is the gorgeous geography and wardrobe.  The movie is luscious in appearance from the very beginning, a cinematic pastel pastry.   Hartfield is seen with its lovely painted screens, wall covers, busts and sculptures (showing that indeed Emma has very little to vex her) and a wide expanse of green lawns surrounding the property and Emma with her wide expanse of various silks and muslins to don at her leisure.  Inexplicably, Mr. Knightley's Donwell Abbey is mostly covered with sheets, as if he has already packed his bags and decamped.    The small glimpses we get of the village of Highbury are exactly what it should be, as well as the stunning vista from Box Hill.
I enjoyed Emma, although I didn't fall in love with it.  I found the BBC's 2009 adaptation to be superior, maybe because the 2009 version had four episodes, clocking in at 60 minutes each.  Having four hours at its leisure gave time not only for backstory and build up but for the viewer to connect and care about the characters.
Regardless, I found Emma a pleasant diversion to while away the afternoon while I dreamt of finding my own Mr. Knightley.

This is very helpful. thank you, admin!!!