SUSPENSE AND SENSIBILITY: OR FIRST IMPRESSIONS REVISITED by Carrie Bebris 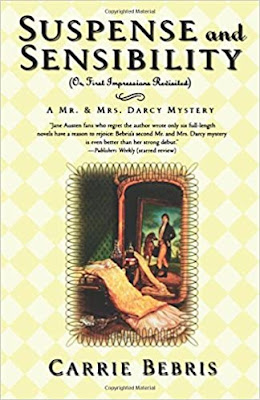 Fresh from the curious and unsettling matter of Caroline Bingley (as related in Pride and Prescience), Mr. and Mrs. Darcy have every intention of enjoying their still newlywed status at Pemberly until they are confronted with another mysterious situation, one of...
Suspense and Sensibility
Elizabeth Darcy and her beloved husband Fitzwilliam are taking on the responsibility of finding a suitable suitor for Elizabeth's younger sister Kitty, thereby assuring her a proper place in society.
The angels smile on the young and a perfect match is found, and wedding plans are soon under way. Suddenly a change in personality occurs in Kitty's soon to be model husband--a change so striking as to jeopardize not just the Darcys' social standing, but their lives as well.
A mysterious mirror, an insidious reprobate from the past, and matters far beyond the social circles around Pemberly all come into play in a dangerous puzzle, where the consequences may be the exchange of a soul for a soul.
Once again the Darcys take center stage as the Regency era's answer to The Thin Man's Nick and Nora, searching for truth between tea times, amid the social whirl of Jane Austen's England.

Have you ever started a book series, loved the first book and then were sorely disappointed by the next?  That didn't happen with Carrie Bebris' Mr. and Mrs. Darcy Mystery series.  I absolutely loved Suspense and Sensibility just as much as Pride and Prescience.   In their sophomore outing, Fitzwilliam and Elizabeth Darcy, less than six months into their marriage, have taken it upon themselves to introduce Lizzy's younger sister, Kitty Bennet, to London society in the hopes that she might make a most fortunate match.  Through Darcy's acquaintance, Sir John Middleton, Kitty (and the Darcys) are introduced to Harry Dashwood, son of John and Fanny Dashwood, and heir to the Norland estate.  The two quickly form an attachment but before all can be happily ever after, Harry undergoes an untimely and frightening personality change, leaving Lizzy and Darcy to investigate what exactly is going on in Harry Dashwood's world, as well as fighting to protect their family.

Like Pride and Prescience, Suspense and Sensibility has elements of the gothic and supernatural, which I am absolutely here for.  Those particular elements might be too much for those who don't care for the supernatural but for this reader, I found the aspects exciting and, as Lizzy herself would say, excessively diverting.  As such, Suspense and Sensibility was as much a page-turner for me as Pride and Prescience; I read the book in one sitting.

Spending another delightful afternoon with Darcy and Lizzy is well worth the time.  I was happy, as well, to spend it not only with Kitty, who was very much a supporting player in Pride and Prejudice, but our old friends (and perhaps nemeses) from Sense and Sensibility, including Fanny Dashwood, Edward and Elinor Ferrars, Marianne and Colonel Brandon, and even Lucy Steele Ferrars.   In fact, if I had a single complaint, it would be that I would have liked to have had more time with the Dashwoods, Ferrars and Brandons.

As with the first book in the delicious series, Suspense and Sensibility is good, clean intrigue with no objectionable language or adult-themed "scenes."  The mystery is engaging and satisfying, the conclusion dovetails nicely with the small hints that Jane Austen herself gave us about a character or two, and leaves the reader looking forward to the Darcys' next mystery outing.

In short, I thoroughly enjoyed Suspense and Sensibility - - heck, I loved it -- and to be honest, I've read it more than once.  It has that perfect balance of the supernatural, mystery, and love between Darcy and Lizzy, as well as giving Kitty Bennet a little love too.  And Harry Dashwood wasn't so shabby.

Suspense and Sensibility is available for purchase at major booksellers, including Amazon.

FTC Disclosure:  This book came from my own personal library.  I was neither paid nor compensated for this review.