THE SWITCH by Joseph Finder 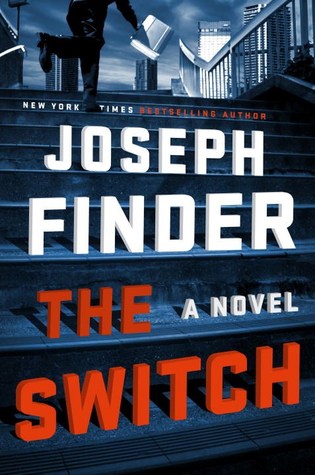 A simple mix up throws an innocent man into the cross-hairs of sinister government secrets and ruthless political ambitions in this timely, electrifying thriller from New York Times bestselling author Joseph Finder. - from Amazon

Don't you just love when you find a book that keeps you so engrossed you stay up much later than you should because you simply must finish the book?  The Switch was that book for me.  Now just to be transparent, I didn't finish the book in a day or so - real life got in the way.  Had I been able to sit down unencumbered, as I eventually did, I would have read the book straightaway.  For the record, I devoured the second half of the book in one sitting and into the wee hours.

Joseph Finder has been a published author for a number of years and I have read other books of his, also to my delight and satisfaction.  He tends to take normal, benign situations and turn them on their heads and he certainly does this with The Switch.   Michael Tanner is your average, ordinary businessman who's rushing through the security at LAX to catch a flight.  In his haste, he picks up a laptop that's not his and doesn't realize it until he's in the air, on the way home.  This would normally be a simple inconvenience but unfortunately for Tanner, he's picked up the laptop of a U.S. senator who has some highly confidential documents on it.

This is a brilliant hook by Mr. Finder as we've all scrambled to collect our belongings in airport security and it's an entirely plausible scenario that the item you think is yours is not -- and the worst case scenario is that you could pick up something that might endanger not only you but everyone around you.

From the moment Tanner realizes that he is holding a ticking time bomb, and the senator realizes that she does not have her highly sensitive laptop, The Switch explodes in thrills, action and intrigue, as Tanner literally runs for his life to stay ahead of the government, the senator, the senator's right-hand man and whoever else may be watching.  The plot overall is fairly simple -- and that's not meant derogatorily.  Mr. Finder manages to weave an intricate tale from a straightforward notion that will keep the reader guessing what will happen next, as well as get you thinking about exactly what does Big Brother know?

The Switch keeps the number of characters, relevant and otherwise, fairly limited, the tension tight, and the adrenaline pumping.  If I were to point out any weakness it would be that the senator herself is a relatively supporting character but that is the most minor of criticisms.

I found The Switch to be an enjoyable, highly satisfactory rollercoaster ride of a book and would not hesitate to recommend it, nor anything else by Mr. Finder, who is an excellent go-to author for exciting, entertaining fare.

FTC Disclosure:  I obtained this book at my local public library.  I was neither paid nor compensated for this review.