DEATH ON OCEAN BOULEVARD: INSIDE THE CORONADO MANSION CASE by Caitlin Rother 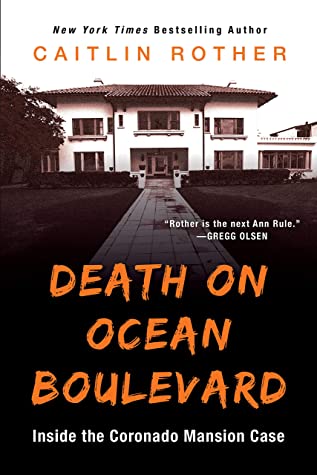 "I got a girl.  Hung herself in the guest house."

So starts the investigation into the death of Rebecca Zahau, a beautiful young woman who was the live-in girlfriend of the wealthy and older Jonah Shacknai.  According to friends and family, Rebecca was not the type to commit suicide, much less by hanging.  She, like the crime scene, seemed to be a bundle of contradictions, from a smart, ambitious professional to an estranged wife with a tale of kidnapping in between the reconciliations with her husband.  What made Rebecca's case so newsworthy was not only the unusual way in which she died, be it suicide or homicide, and the location - a historic beachfront mansion built in 1908 by one of San Diego's most powerful men in the affluent resort city of Coronado - but that the six-year-old son of Rebecca's boyfriend suffered a fatal fall in the same home only two days before Rebecca's death.

How could this lovely home be the scene of two deadly incidents within two days?   Were the deaths of Max and Rebecca related?  Did the authorities do their jobs in both cases or did they close the investigations too quickly?

As a true crime aficionado who has studied abnormal psychology and read more books in the genres than your average reader, the cases of Max Shacknai or Rebecca Zahau are two of the strangest that I have ever come across.  I have an additional "connection" to this case, besides just being a "fan" of true crime.  I lived in San Diego at the time Max and Rebecca died and my former husband and I not only spent a good amount of time in Coronado but we also got married there.  Despite the miles of newsreel on this case, and gallons of ink spilled, I still knew very little about the cases.

Investigative journalist and author of more than a dozen books, Caitlin Rother was present from the start, when news broke that Rebecca Zahau had been found hanging from the balcony of the Spreckles/Shacknai mansion.  As an enthusiast of Ms. Rother's books (see my reviews for Lost Girls, I'll Take Care of You, Poisoned Love,  and Hunting Charles Manson: The Quest for Justice in the Days of Helter Skelter), she does not disappoint with her newest offering.   Her stellar investigative skills allow her to go deep into Death on Ocean Boulevard, laying bare the backgrounds of Rebecca, her family, Jonah Shacknai, his brother Adam and Jonah's former wife, and Max's mother, Dina.  Through Ms. Rother, we, the readers, get a first-row seat at the trial where we hear the full length of evidence, both for and against the suicide theory, as well as the inexplicable areas in which there was a lack of investigation and/or answers.

I found Death on Ocean Boulevard akin to diving down a rabbit hole of questions and definitely at least a mystery or two.  Ms. Rother spent nine years researching this bizarre and uncommon case, which is evident in her strong and solid writing, which is more in the style of narrative nonfiction than that of gratuitous violence.   Additionally for Ms. Rother, Rebecca Zahau's official cause of death has a more personal link for her and her late husband's suicide, with the pain and unanswered questions it brings.

Although Death on Ocean Boulevard is brimming with more facts than has ever been publicly shared before, the book itself is not swallowed up by it and proves to be a worthwhile read.  While others have given their take on the Zahau/Shacknai cases, Ms. Rother's Death on Ocean Boulevard does the events justice and is the definitive source of the sad and sordid tale.

I would not hesitate to recommend Death on Ocean Boulevard to anyone wanting to know about this tragic case and/or anyone who needs confirmation as to why Caitlin Rother remains one of my favorite true crime authors.

Death on Ocean Boulevard is available for sale at most booksellers, as well as Audible if you prefer audiobooks.

For more information on Caitlin Rother, please visit her website.

FTC Disclosure:  The review copy of this book was provided to me by the author in exchange for a fair and honest review.  The provision of this book did not affect the outcome of my review.  I was neither paid nor compensated for this review.